OUR LEADERS ARE AT LONDON 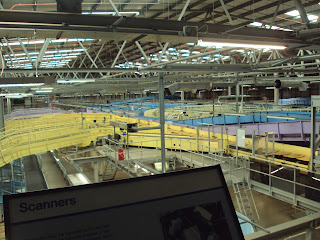 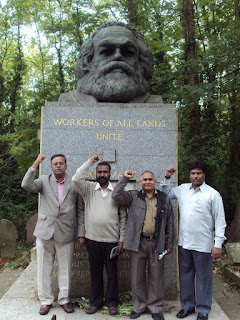 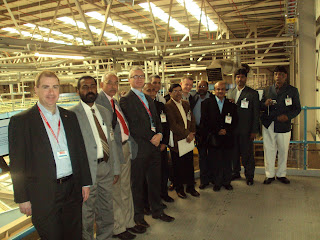 Posted by AIPEU GUJARAT at 3:13 PM No comments:

To
The Central Office Bearers,
All Circle Secretaries
Of AIP SBCO Employees Association.

It is heartening to note that our organization has achieved long wanted recognition of the Department in last verification of the memberships under check off system. I am really proud to convey my comradely greetings and " Red Salute" to all of our members. We take pride in that at present we are officially affiliated under NFPE and the Department would have to extend all trade union facilities to our union to enable our union to join on table bargaining. We will remember the great contributions of our beloved federation, ( i.e NFPE ) and all other organization under NFPE, the Group – C union in particular for sincere Co operation in the process of check off system.

We are obligated to build up united struggle to save our postal services. In the interests of all cross section of postal employees and the common people as a whole. We are committed to promote vigorous struggle against the anti people activities and policies of the 2nd UPA Govt. So come out comrade, to share our new beginning with new hope and energy to strengthen our organization so that we may achieve our goal.

Posted by AIPEU GUJARAT at 2:58 PM No comments:

Notice under article 25 of the constitution of All India Postal SBCO Employees Association read with article 20 ( a ) and 22 ibid is hereby given that 1st All India Conference of this Association will be held at Hyderabad ( Andhra Pradesh ) on 11.12.2010.

The following shall be items of agenda for the 1st All India Conference : -

1. Consideration and adoption of report.
2. Discussion on financial affaires.
3. Organizational Review.
( I ) Discussion on proposed Strike from 13th July'10 ( finally deferred ) and its outcome.
( ii ) Organizational Position in all level.
( iii ) Finalization of Subscription.
( iv ) Membership verification.
4. Attacks on Postal Services
( I ) Privatization and outsourcing of postal work.
( ii ) Attack on SBCO workers.
5. Implementation of MACP.
6. Policy and Programme.
7. Election of Office Bearers.
8. Election of Federal Councilor.
9. Appointment of Auditor.
10. Venue of next AIC.
11. any other item with the permission of the chair.

Department of Posts has deputed a ten (10) member delegation led by Sri. A. K. Sharma, Dy. Director General (Establishment) to united kingdom to visit Royal Mail Groups Automated Mail/Parcel processing facilities for five days from 18th to 22nd October 2010. The following are the other nine members:

On completion of the one week training programme individual certificate has been issued to all delegates by Royal Mail Group.

Royal Mail Holdings is a public limited company. Royal Mail is responsible for universal collection and delivery in the UK. Royal Mail delivers 33 million items every working day, 71 million items handled daily, and had a network of 11905 post offices, 1, 1600 post boxes, 450000 collection centres, 37 million delivery points, 33000 vehicles & 29 Aircrafts & 27000 bi-cycles. Total number of workforce is 1,68000 which includes regular contracts and casual workers. 70% of the workforce is delivery staff. For the financial year 2008-2009 Royal Mail had an operating profit of 321 million pounds, with all four group businesses running on profit.

In UK, Postal Sector reforms and liberalization started in the year 2006 three years ahead of other Europeon countries. Royal Mail lost its monopoly and competitors are licenced to carry mail and pass it to Royal Mail for delivery. Delivery is exclusively done by Royal Mail. There are currently fifty (50) Licenced Mail operators including Royal Mail. Royal Mail claims a market share of 75%. There is only one delivery each day. Delivery of letters, Delivery of parcels and operating post offices are separately done in different places (centres). Universal service obligation (USO) is applicable to Royal Mail only. USO Loss for 2009-2010 is 100 million pounds. No subsidy is given by Government to meet USO obligation. Tarrif is fixed by the Postal Regulator called Post comm..

All the centres – Post office, Parcel force and Letters – are fully computerized and automated. Fully automated mail/parcel processing facilities are provided for sorting of articles and also for Postmen beat sorting. The letter sorting machine has a maximum capacity of sorting 40000 letters per hour.

The Royal Mails motto is "a commercial business with a social purpose" and "Quality first and value for the money & security". It is told that the reforms & liberalization has resulted in more efficiency, better service standards, competition, stimulating innovation, reducing prices, quality raising, choice to the public and level playing field for all competitors (players). Royal Mails borrowed 1.2 billion pounds to invest on transforming their operations, which includes further induction of latest technologies in the automation programme.

The UK Government is proposing to further intensify the Postal reforms which includes the privatization of letter mail services, closure of 2500 Post offices in the name of network transformation.

The meeting with the Communication Workers Union (CWU) Representatives was most informative and cordial. The CWU, the only one union in the Royal Mail, was formed on 26th January 1995 as the result of a merger between National Communications Union (NCU) and the Union of Communication Workers (UCW). The CWU is the sixth largest Union in Britain. The management and functioning of the union is in a most democratic manner. For calling an industrial action (strike) strike ballot is compulsory. 51% should vote for the strike. Annual conferences are held at all level. Election of office bearers are by secret ballot. CWU has 87 Postal branches & 73 Telecom Brnaches, Postal membership is 148597 and Telecom & Financial services membership is 74121. Total membership is 2,22718 (including Telecoms & Giro Bank). The last industrial action took place in the year of 2009. The CWU representatives made it clear that they strongly oppose any move of the Government to privatise the Royal Mail either by selling shares or by outright sale to other private Postal giants. Wage revision is done every year though negotiations.

The workers of the Royal Mail have full political freedom and the CWU leadership at present is joining hands with British Labour Party. Members can have their own political freedom to join any party of their choice.

It is worth mentioning here, that the Royal Mails pays maximum attention for customer satisfaction and is very much concerned with the quality and security of services. Premises of all the centres are kept neat and tidy and state of the art facilities are provided to the public. While discharging the corporate social responsibility in a most commendable manner, they are equally concerned with Revenue protection. Every safeguard is taken to prevent revenue leakage and they are updating the technology for preventing revenue leakage.

In short the visit to Royal Mail provided us an opportunity to understand the development that are taking place in the Postal Sector in a most advanced and developed nation like Britain and especially in London. While opposing the unbridled reforms and liberalization, there are of course, certain positive aspects which are to be deliberated upon, before putting it into practice in our country.

The delegation had an opportunity to visit some important tourist attractions of city of London like Tower of London, London Eye etc. The delegation left for in India on 23rd October and reached New Delhi on 24th October 2010. The guidance given by the Leader of Team Sri. A. K. Sharma, DDG (Estt.) and Sri. Subash Chander, Director (SR & Legal) is to be worth mentioned.