Peace comes back in Gujarat. Now concentrate on one day's strike on 2-9-15

Gujarat comes back to normal and routine atmosphere after disturbances.

All employees who could not attend office due to bunch, failure of transportation, imposition of curfew etc are entitled for Special CL. They should apply accordingly. Circle Union has also addressed administration to issue instructions to all units in the matter.

All are requested to follow directives of CHQ/Fed/Confed & observe 1day strike on 2-9-15. All details sent by Circle/CHQ by post to each Dn and elaborately & repeatedly posted on websites during last few weeks. 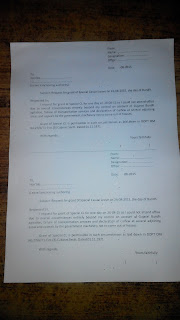 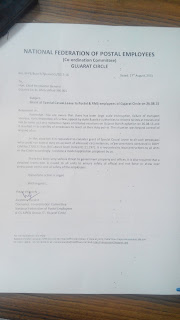 Respected sir,
Instructions have been issued for various measures and initiatives for promotion of POSB schemes and persuading staff and customers for opening Post office SB accounts and make transactions in it. Sir, I suggest that permission should be granted to allow opening of POSB accounts in the name of Postal CO operative credit societies as well as recognized unions/associations of the department itself. This will boost zeal of employees and there will be considerable Numbers of transactions. Presently the situation is ironical because the department issues cheques in the name of the unions and societies but not opening accounts in the same names. Such a wonderful situation puts staff in embarrassments. Kindly examine suggestion as above.

The Government of India , Ministry of Finance  has  again rejected  the demand of PJCA  for inclusion of  matters relating to  GDS  Wages  revision  and other service conditions in 7th CPC . During the meetings on PJCA  6th May, 2015  Strike Charter of Demands  Postal Board and Communication  Minister  has assured  that a strong  note  with strong recommendations will be  sent to  Finance Ministry for inclusion  of GDS  in 7th CPC . But unfortunately  it has been rejected  once again and it  shows  the thinking of  Government of India  towards  this most deprived  and exploited  section of  Postal Department . It has come to notice that Department has started action to form Bureaucratic Committee which requires to be protested strongly. Besides this the file of Cadre restructuring has been sent back by DOP&T for clarification on some points. Though we  were  assured by the Department  that all Cadre Restructuring  proposals  will be implemented  before 7th CPC.

In all cadres of Postal Department, there is acute shortage and no appropriate action is being taken by the Postal Board to fill up the vacancies.

Hence  being  aggrieved  we strongly  oppose all these moves of Government of India and  Department of Post, and to protest all these  things  the following  programme of action is declared for the below mentioned Demands: -

1.      Observe protest day on 19th August 2015by observing lunch hour demonstration in front of all Divisional, Regional and Circle offices.

2.   One Day Dharna on 26th August 2015 at all Divisional, Regional and Circle Offices.

Postal JCA appeals entire  rank and file to make  all efforts to make all agitational  programmes  a grand success to give a  strong message  to Government of India  and Department of Posts  that if  our genuine  demands are not settled the Postal Employees  including GDS  will be compelled to go  on Indefinite Strike.

Copy to:
The Secretary Department of Posts, Dak Bhawan, New Delhi-110 001 for information and necessary action.

Posted by AIPEU GUJARAT at 10:25 AM No comments:

Bhavnagar division will demonstrate strength of unity against rude approach and threatenings by ASP.

congratulations to all Divisional Secretaries and Team for outstanding achievement in enrollment of members throughout Gujarat Circle.

Dear Comrades,
At last 6th August is over. All of you were busy in obtaining maximum letters of authorisation from staff. As anticipated we have been not only the first and final choice of employees but we have succeeded in getting more members throughout Gujarat Circle in spite of so many retirements in past 5 years. Really inspiring reports are coming in from various divisions like Ahmedabad City, Navsari, Valsad. Rajkot, Bhavnagar, Mahesana, Junagadh, Banaskantha and yet other divisions will furnish equally encouraging picture. This is because of hard work on ground level by all of you. This is because of respectful acknowledgement of our mighty organization AIPEU Gr.C under NFPE by majority of staff. This is also a response to our dedicated leaderships at Central HQ and NFPE. I greet all of you for outstanding achievement.

Please carefully watch names of members in more than one list of unions and ensure their representation to Divisional heads for treating their Letter of authorisation towards our Union only as valid.

All are requested to inform Circle union  by message about number of members in the list submitted to divisional heads.
Posted by AIPEU GUJARAT at 9:44 AM No comments:

All Divisions must complete all paper work for advance submission of letters of authorization to Divisional heads concerned and carefully check all forms, signatures,correct name of union and signature in each page of all four copies and signature of receiving officer on office copy on submission of triplicate copies of list of members and submit on or before 6th August.

Team Junagadh is preparing lists of members in P3 & P4 unions at my home. 168 members' forms out of total 183 PAs are ready to enlist. After completing, all will enjoy hot breakfast. It is 11:30 night.

Thanks for such a huge membership in my native division.
Posted by AIPEU GUJARAT at 6:23 PM No comments:

MAKE THE ONE DAY STRIKE ON 2ND SEPTEMBER-2015 A HISTORIC SUCCESS.
*****************
During the one year period of BJP Government, it may be clearly felt that this Government has betrayed and cheated the workers and worked against them curtailing  their trade union rights, wages and social security’s which were earned through sustained struggles and sacrifices by them. Every action of Government is pro capitalists, pro employers. Large scale amendments in labour laws are aimed to benefit industrialists/employers to give them free hand to retrench/lay off workers, declare closure/shutdown of establishment and resort to mass scale contractorization.

The main object of these changes is to do away with whatever minimal protection the workers are having under present labour laws despite their large scale violations in connivance with the state Governments. The present Central  Government  does not  want to implement the consensus recommendations of 43rd, 44th and 45th Indian Labour  Conferences of formulation of minimum wages, same  wage and  benefits as regular workers for the contract  workers and granting  status of workers with attendant benefits to those employed in various Central Government schemes like Anganwadi, Midday Meal, ASHA, Para Teachers etc. On the contrary the Government drastically curtailed budget allocations to all those centrally sponsored schemes meant for poor people’s welfare.

Beside these labour laws the Central Government is also doing away the workers from social security schemes like, EPF and ESI making them a optional aiming to dismantle the basic social security cover available to organized sector.
The Government has not taken any concrete measures to curb price rise of essential commodities. On universal public distribution system, the Government is trying to scuttle it through Direct Benefit transfer scheme resulting further squeeze on the common people,
After coming in Power this Government declared total Ban on recruitment in all Central Government Services causing large scale unemployment. 100% FDI in Railways, the biggest establishment of Central Government has been declared and further projects will be launched on PPP Model. Bigger and important stations will be given to private  parties to develop and take  users charges causing more burden on common man.49% FDI  has also been declared in Defence and 41 Ordnance Factories  will be privatized resulting more contractorization  of labour . Disinvestment has already been started in C.P.S.U.S. like Coal India Ltd., NTPC and NHPC etc. Plan to corporatize Ports is also in pipeline.

Whatever promises were made by Modiji during election campaign. On all of those this Government has taken U turn. Not a single promise is being fulfilled. Land acquisition act is also being amended which will be against the interests of Farmers. No reasonable minimum support price for the agriculture products and nothing to compensate the loss of crops caused due to natural calamities.

In Central Services the New Pension Scheme  was introduced  during the previous NDA Government and now this Government  also does not agree to replace it by Defined benefit Pension Scheme causing more miseries to the working people,

The demands of Central Government Employees for grant of DA Merger, Interim Relief and date of effect of 7th CPC recommendations from 01.01.2014 has also been rejected.

In Postal Department, Government is moving ahead to corporatize various services based on the recommendations of Task Force Committee headed by T.S.R Subramanian. The Department of Posts and Government of India has still not taken any decision to include G.D.S. in 7th CPC. The agreement and assurances made by the Postal Board during the course of negotiations on PJCA Strike Charter of Demands are not being implemented.

So keeping all the facts in mind and in pursuance of decision taken by All Central Trade Unions to go on ONE DAY STRIKE on 2nd September-2015 , the National Executive of Confederation and Federal Secretariat of NFPE  have  also endorsed the decision to resist the onslaughts on working class in the wake of neo-liberal Economic Policies by participating in the strike.

NFPE appeals to all the affiliates and entire rank and file to make maximum efforts for the grand success of ONE DAY 2nd September-2015 Strike and defeat Anti People, Anti Working Class Policies of Government of India.
Posted by AIPEU GUJARAT at 7:15 AM No comments:
Newer Posts Older Posts Home
Subscribe to: Posts (Atom)