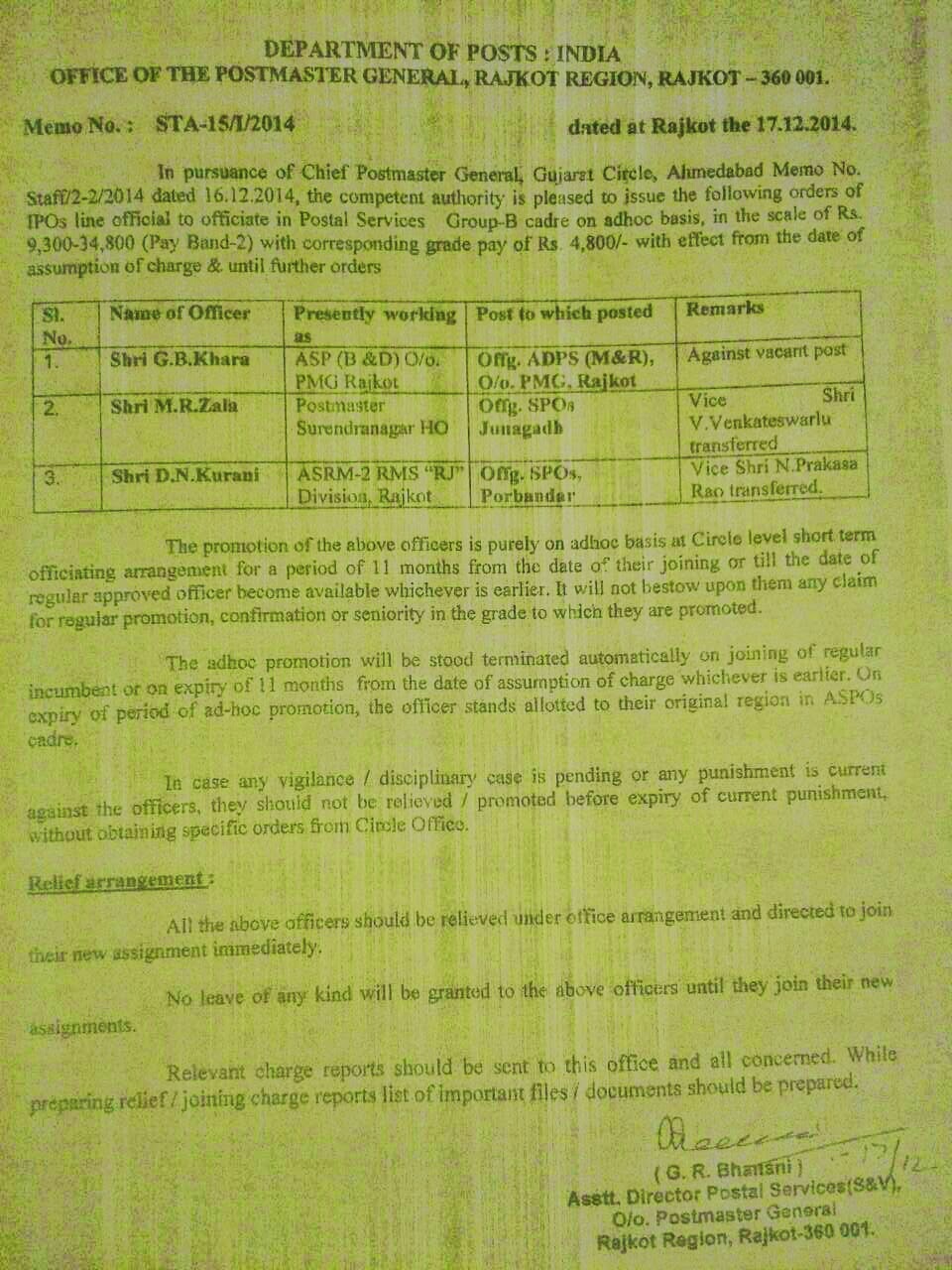 Posted by AIPEU GUJARAT at 4:31 PM No comments:

1.  NFPE & AIPEU – GDS (NFPE) has filed a Writ Petition in the Supreme Court praying to (1) give direction to the Government to implement the 1977 Judgment of the Supreme Court to treat Gramin Dak Sevaks as Civil Servants and grant all benefits of regular employees (2) to give direction to the Government to include Gramin Dak Sewaks under the purview of 7th Central Pay Commission and (3) to quash the Gramin Dak Sewaks (Conduct and Engagement) Rules 2011. Senior Advocate Mr. Justice (Retired) M. R. Calla and Advocate Uday Gupta appeared in Supreme Court on behalf of NFPE & AIPEU – GDS (NFPE).

2.  Hon’ble Supreme Court after hearing the argument in Writ Petition ordered to transfer the case to Delhi High Court for a decision after hearing the Government of India, Department of Posts. In the Delhi High Court the Writ Petition No. 168 of 2014 came up for hearing on 19.09.2014. The Department of Posts filed its counter affidavit. High Court adjourned the case to 04.02.2015 granting time for filing rejoinder reply statement.

“It is submitted by Mr. Mukesh K. Giri, Learned Counsel appearing for the Petitioners that Union of India has framed a set of rules called Department of Posts Multi-Tasking Staff Recruitment Rules 2010, by which the Department of Posts (Group ‘D’ Posts) Recruitment Rules 2002 has been superseded. He has drawn our attention that part of the Rules which states as follows:
“Gramin Dak Sewaks are holders of Civil Posts but they are outside the regular civil service due to which their appointment will be by direct recruitment”.

It is submitted by him (Advocate who filed the three Writ Petitions on behalf of some GDS) that in view of the aforesaid declaration under the Rules, the petitioners can agitate their other grievances before the Central Administrative Tribunal”.

5.  After hearing the above submission of the Advocate who filed the three Writ Petitions on behalf of some GDS, the Supreme court adjourned the case to 09.12.2014 to hear the arguments of our Advocate in the Impleadment Petitions IA No. 1 filed by NFPE in WP (C) of 17 of 2009. On 09.12.2014, Mr. Justice (Retd.) M. R. Calla, Senior Advocate, Appeared and argued the case on behalf of NFPE. Our Advocate argued for a direction to the Government to grant Civil Servant status and all benefits of Civil Servants to the Gramin Dak Sewaks. The Advocate who filed the Writ Petition has submitted that GDS can agitate their other grievances before the Central Administrative Tribunal (CAT). Finally the Supreme Court ordered that the grievances of the GDS who filed the three Writ Petition in Supreme court may be agitated before the Central Administrative Tribunal (CAT). (Copy of the Hon’ble Supreme court order yet to be received.)

7.  The above detailed factual position is explained because daily many GDS from all circles are calling up over phone to know the correct position of the Court case. Case filed by NFPE & AIPEU-GDS (NFPE) will be heard in the Delhi High Court on 04.02.2015. The other three Writ Petitions came up for hearing on 02.12.2014 and 09.12.2014 is not filed by NFPE & AIPEU-GDS (NFPE).
Posted by AIPEU GUJARAT at 12:25 PM No comments:

Photos of the convention are published below. 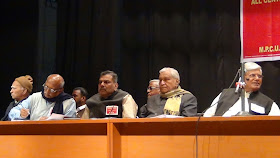 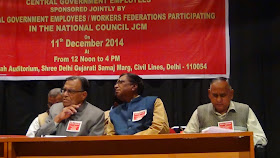 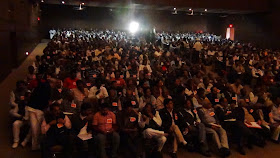 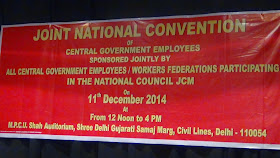 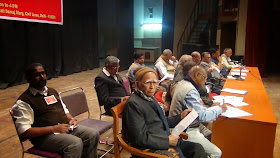 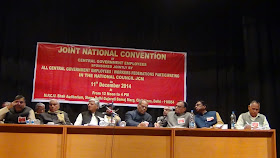 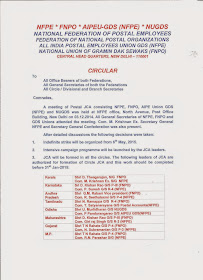 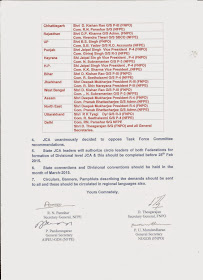 After detailed discussions the following decisions were taken:

2.         Intensive campaign programme will be launched by the JCA leaders.

3.         JCA will be formed in all the circles. The following leaders of JCA are authorized for formation of Circle JCA and this work should be completed before 31st Jan-2015:

5.         State JCA leaders will authorize circle leaders of both Federations for formation of Divisional level JCA & this should be completed before 28th Feb 2015.

6.         State conventions and Divisional conventions should be held in the month of March-2015.

7.         Circulars, Banners, Pamphlets describing the demands should be sent to all and these should be circulated in regional languages also.

Sophistication without basic amenities will not be succeeded 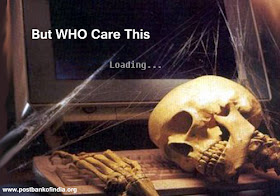 So many readers are interacting with me through emails, blog comments, Facebook chat, blog contact forms, etc.  Some of them are criticisms and some others are good thoughts.  Today I am presenting before you some thoughts sent by one of my blog readers anonymously, without editing anything.  Only the headline and picture are my contribution.

I am posting his suggestions and thoughts because now the most of the discussion among India Post employees will start or end with the matters like slow speed of computers, lack of availability of printers, scanners, UPS, etc.  Earlier I have depicted these matters as DOP COMEDY EPISODE 1 in my post Experiences you may come across in your daily office life.

Let us hear what my valued reader says.

India Post during yesteryears was able to impact the commercial sector due to the monopoly of communication.  Now at present other means of communications, couriers, digital signatures and so on have come, such that its presence is bit shadowed.  The Banks at the other hand previously enjoyed the privileged class as sole bankers, but ever since the ATM's and Internet banking came the impact is much lower than it used to be earlier, if they themselves take part in strike or Banks are closed down.

What India Post needs to do is to make its presence felt in the online sales field with robust technology of delivery.  There are numerous problems in its operations of which most of the problems are self-created or having solutions.  More offices are complaining of the non-replacements of UPS Batteries, poor internet facilities and Vintage systems. Even after Microsoft itself have stopped support for Windows XP, the Postal Department still uses the systems that are only capable of running Windows XP and not suitable for upgradation.  The life of Systems and Printers are to be evaluated and proposals for new systems have to be taken practically.  Normal life of Systems will only be around 3 to 4 years and 2 to 3 years in case of Printers.  This life span is taking into account of the technology advancements over years.

India Post needs to think of "why they are going to CBS platform" and what are the needs lead the Department to this venture and how important the same can be to the Business of the Department.  The CBS platform is meant to bring more populous opportunity for the general public as well as the corporate field to business.  Banks are surviving in the corporate field as they can open accounts not only in the name of individuals but the corporate accounts as well.  They are still the lead institution to disburse loans.  The Banks do not by itself gain any knowledge of credit policies by themselves.  They charter a lot of private bodies to empanel into their works for auditing, consultancy, verifications, Legal consultancy, reclaiming of loans etc.  Every Bank charges much amount as other fees / Service charges even for the Loans they disburse and also it is so much pain to get a loan ever so smoothly.  Department can also think alike to disburse loans swiftly and thereby take the advantage of getting more revenue.  It is still hard to understand why there are no loans given to, MIS or other savings instruments that are kept deposited in India Post itself.  Even after so many years why small scale loans such as Gold Loan and Flexi loans against RD or MIS or TD etc. are not in the cards.  Department has to think about the corporate world as well, why the accounts are limited to individuals, they need to cater the corporate field also, and then only the business will improve. Just like the Demand Draft facility, India Post too can leverage the IPO (Indian Postal order) as a means of transaction instruments with much higher values awarded and not limiting the IPO value to Rs. 100 as maximum.

We are hearing about the ATM's of Post Bank of India for so long, still why this implementation is taking snail speed in implementations whereas the private financial institutions and even the Co-operative banks are going ahead with so many ATM's planted at various places.  India Post should take the ATM proposals much more fruitfully; they can plant a lot of ATM's for other banks transactions and gain business.  Can also float tenders for that and be a governing body for ATM's that are installed on behalf of India Post, which has a great revenue potential for India Post. India Post has been benefitted by technology a lot, technology is the backbone of the Department of Posts now, just think at the line that follows, what have the Department in turn given to the staffs (other than the clerical salary) like the System Administrators who work tirelessly striving for achieving goodness to the Department. Staffs need not only motivation but incentives as well so that the morale is high and thoughts are positive.
Why the picture of losses are binded to the Department of Posts only.  The Banks have done more than 56,000 Crores of loses and irrecoverable damages that are simply written off.  The staffs are paid much higher than what a normal staff in the Department of Posts gets.  The quality is par below the average of what the Postal service provides.  The time has come when you should understand the ground reality and the Department of Posts needs to tighten its lace to bring more revenue by getting out from the shell and do its business independently.  Make sure its employees are paid to the satisfaction, bring in more facilities, step up the overall looks and business feel, Provide air conditioners, good Systems, Printers, UPS, Gensets, sitting chairs.  Reduce the burdensome paper works to make it simpler for customers to get facilities that are provided. Business won’t come by waiting; it comes by means of how you handle things promptly. Reduction of staff will reduce the overall performance.  There is no information counters available even at Head Post offices.  Staffs are not given adequate training whenever new facilities are being implemented causing confusion among themselves.