You all know, we had represented to Hon.CPMG in the matter of fraud case of Shihori SO of Banaskantha division wherein the SP Bk Dn had addressed letters to several officials asking to credit big amounts (in thousands & lacs) within given time limit. Copy of our Email & Memorandum to Hon.CPMG was posted on fb as well as blog :
http//:aipeugujarat.blogspot.com

Hon.CPMG has considered our request and sent copy of email of Rashmin Purohit to SP Bk Dn with direction that no recovery be demanded on the basis of letter.

We thank Hon.CPMG for considering our representation. We are not against any action as per rules if any official is actually at fault, but in this case several officials who had no concern with the fraud case/fraudulent transactions were also waxed by SP and direction was given to credit huge amounts.

We also demanded for action against concerned Divisional Head also for serious administrative lacunas and negligence which facilitated commission of the fraud. As heard, the C.O. has also initiated disciplinary action and delivered charge sheet by hand as the SP concerned who retires by end of this month.

Friends, this is unique and noticeable victory of unity, timely action and strong representation by Circle Secretary.

I am sad that in Punchmahal division also similarly lacs of rupees were demanded by issuing letters and innocent staff credited very huge amounts under fear of dismissal or loss of retirement benefits. Divisional unions did not take timely action but we had personally visited Godhra and asked for certain details regarding recoveries by writing letters, punishments and by any other ways from staff and amounts of claims settled/pending etc. Till this date we did not receive information. We want to help them also. Hope, they will provide details early.

Copy of letter of Hon. CPMG Gujarat is given below: 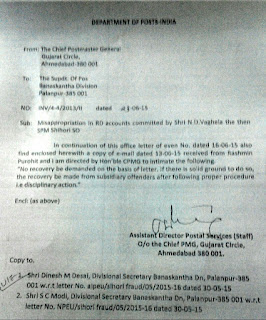 Hon'ble sirs,
namaskar, a memorandum is attached expressing pains and details showing how innocent employees are forced to deposit huge amounts which are defrauded by SPM Shihori SO of Banaskantha division.

Staff side has no intention to interfere in any administrative process so far as a fraud case is concerned but in this case quite illogical approach and skipping the main accused justifies a memorandum from staff side with an urge for reassessment of contributory responsibilities. Off course, individual representations are sent to SP Banaskantha division by the concerned staff but there are common factors which requires care and consideration by the higher authorities.

staff side has no personal grievance or prejudice against any one but it is not understood as to why administrative lapses has not been considered and dealt with and why the principle offender is freed from responsibility and his assets are not taken in to consideration and why he is not forced to credit amounts though he is happily serving as PA Palanpur HO.

in our opinion, a fresh consideration of entire case is required. A detailed letter should be given to all concerned staff to inform them as to what are reasons and details justifying their responsibilities and an opportunity of representation should be offered.

urging response and grant of a special meeting with concerned staff,