http://aipeup3ap.blogspot.com/2011/08/scheme-for-engageent-of-gds-on.html
Posted by AIPEU GUJARAT at 2:14 PM No comments:

http://confederationhq.blogspot.com/
Posted by AIPEU GUJARAT at 2:11 PM No comments:

2. Postal CASUAL , Part Time, Contingent Employees, All India Convention will held at Tirupati (AP) during the month of November - 2011.

https://docs.google.com/document/d/1Wn5b5cz3QU1Tuy2FR4-nVaHNL8i0CYzXeaAwPD5pOx4/edit?hl=en_US&pli=1#
Posted by AIPEU GUJARAT at 2:08 PM No comments:

http://persmin.nic.in/RTICorner_PIO_List_DOPT.asp
Posted by AIPEU GUJARAT at 2:07 PM No comments:

http://www.deccanchronicle.com/channels/business/news/sibal-convert-15-lakh-pos-banks-seek-rbi-nod-238#.TjUHtbn1Vx0.blogger
Posted by AIPEU GUJARAT at 2:05 PM No comments: 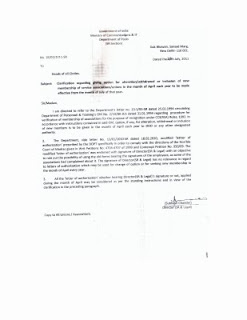 Posted by AIPEU GUJARAT at 2:02 PM No comments:
RESOLUTIONS ADOPTED IN FEDERAL EXECUTIVE OF NFPE HELD AT LUCKNOW ON 26 & 27 JULY, 2011
THIS FEDERAL EXECUTIVE MEETING OF NFPE HELD AT LUCKNOW FROM 26-07.2011 TO 27.07.2011 AFTER DETAILED DELIBERATIONS ON ALL ISSUES RELATED TO THE PROPOSED INDEFINITE STRIKE FROM 2011 JULY 5TH HAS RESOLVED THE FOLLOWING:

1. This Federal Executive has come to the unanimous conclusion that, under the given circumstances the settlement reached with the Administration on the 25 points Charter of Demands is the best possible and fully ratify the decision of the JCA to defer the strike.

2. This Federal Executive further direct the NFPE & JCA leadership to take follow up action to get orders released on all the agreed items in a time bound manner.

3. This Federal Executive demand the Secretary, Department of Posts, to arrange another review meeting on the PLI related issues as the decentralization of certain important PLI/RPLI functions to Divisions has been done contrary to the sprit of the discussions held on 01.07.2011. Review meetings may also be arranged with the unions of Civil Wing and Postal Accounts as assured during the final round of discussion.

4. Regarding the formation of the Committee to review the Speed Post hubs and first class hubs (L 1,L 2) the Federal Executive is of the unanimous view that the induction of new technology and consequent changes in the mail processing should not lead to indiscriminate closure/merger of existing RMS Offices and interest of employees should be protected. The delay in public mail should be avoided and speedy delivery of articles should be ensured.

5. The Federal Executive further resolve that if any unilateral violation of the assurances given to the Staff Side take place then NFPE and JCA shall organize agitational programmes.

Posted by AIPEU GUJARAT at 2:00 PM No comments:

IMPLEMENTATION OF SERVICE DISCHARGE SCHEME FOR GDS - INSTRUCTIONS FOR PAOS

Government of India
Department of Posts
SR Section
No. 16/56/2011-SR July 8, 2011
To
All Heads of Circles
Subject: - Organizing frequent meetings/melas on holidays and Sundays – denial of legitimate rights to the employees to avail Sundays etc.
Sir/Madam,
I am directed to state that the issue of organizing frequent meetings/melas on holidays and Sundays, thus depriving the employees of their legitimate right to avail the break was considered in a meeting taken by Secretary to discuss charter of Demands served with the notice of indefinite strike w.e.f. 05.07.2011 by Postal Joint Council of Action.
2. While in certain circumstances it may be unavoidable strategically beneficial for the Department to hold meetings/melas etc on holidays and Sundays, it may not be done so in a routine manner. Needless to say, the weekly break and holidays etc. have their own significance and it may be kept in view while calling the officials for duty during the break.
3. This may be brought to the notice of all concerned.