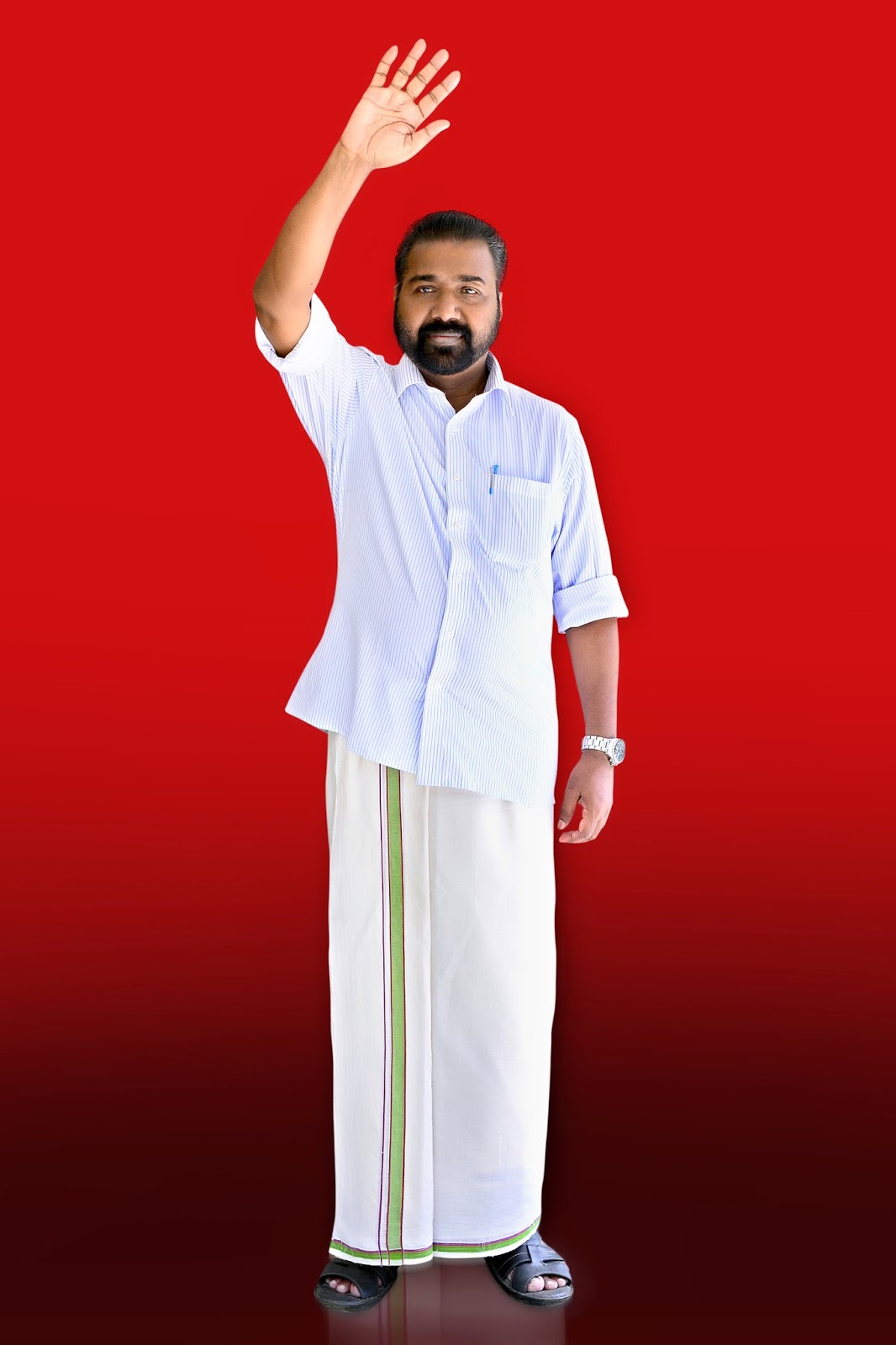 Com. M. Krishnan, Secretary General, National Federation of Postal Employees (NFPE) & Confederation of Central Govt. Employees & Workers, General Secretary, All India Postal Employees Union Group-C (CHQ), Leader, JCM Departmental Council, Department of Posts, Member, JCM National Council will be retiring from service on superannuation on 31st August, 2014.
As per the decision of NFPE Federal Executive meeting held on 21-08-2014 and Central Working Committee meeting of AIPEU Group-C (CHQ) held on 22nd to 24th August, 2014 at Ongole (Andhra Pradesh) Com: M.Krishnan, will continue to function in the NFPE & P-3 CHQ till next Federal Council of NFPE (May 2016) and All India Conference of AIPEU Group-C (June 2015).  He will also continue to lead the entire Central Government employees as Secretary General, Confederation till the next National Conference (2016).
Com: R.N.Parashar, Asst. Secretary General, NFPE, will take charge as Secretry General, NFPE from 01-09-2014 till next Federal Council as per the decision of NFPE Federal Executive meeting.  Com.N.Subramanian, Deputy General Secretary, AIPEU Group-C (CHQ) will officiate as General Secretary, AIPEU Group-C (CHQ) till next AIC, as per the decision of CWC meeting of AIPEU Group-C.
NFPE CHQ, AIPEU Group-C (CHQ) and the CHQs of all other affiliated unions of NFPE extend our best wishes to Com.M.Krishnan and we are sure that he will lead us in the coming days also.
We are reproducing below the resolutions adopted by NFPE Federal Executive meeting and Central Working Committee meeting of AIPEU Group-C on the services rendered by Com.M.Krishnan.  We are also reproducing a letter received from Shri.D.Theagarajan, Secretary General, FNPO.
I.  RESOLUTION ADOPTED BY NFPE FEDERAL EXECUTIVE.
The Federal Executive of NFPE records its full appreciation for the yeoman service rendered by Comrade M.Krishnan as the Secretary General of NFPE. The Federation has scaled new heights during his stewardship and the unity of Postal regular employees and Gramin Dak Sewaks entered into a new chapter under his leadership. The united movements of Postal Workers under the banner of Postal JCA as well as the independent struggles under the mighty National Federation of Postal Employees are further strengthened under his able leadership. He provided a militant, progressive leadership with farsightedness for the betterment of Postal Workers. It is  under his leadership that the NFPE claimed its historic vanguard role of leading the entirety of CG Employees under the platform of Confederation of CG Employees & Workers and it can be seen that the movement of central government employees has launched a powerful movement including strikes for the establishment of 7th CPC with Comrade M.Krishnan as its Secretary General. The integration of Postal and CG Employees with the entirety of Indian working class organisations in developing the path of united struggles against the neo-liberal policies of Government has further been cemented during his tenure. The leadership of confederation has come back to the Postal Organisation after a long period of 44 years and comrade Krishnan is leading the movement of CG employees in the path of struggle with firmness and it is noteworthy to mention that the unity of all JCM National Council organisations has reached its zenith with all coming together in championing the cause of three lakhs of Gramin Dak Sewaks and thousands of casual labourers in Postal and CG services due to his firm efforts. Ideological education of all cadres and employees through several All India and Regional Trade Union Camps under the banners of NFPE and Confederation; Concrete organisational steps for mobilizing the women employees of Postal Department as well as the Confederation level are some of the landmark achievements of Comrade Krishnan. The National Executive notes with happiness that all the affiliates of NFPE have always maintained a unified stand on all important activities of the Federation and this unity is due to the confidence created amongst all affiliates by the unifying leadership of Comrade Krishnan. The relinquishing of charge as the Secretary General of NFPE by him due to his superannuation from the Government Service is a huge loss to the movement but the Executive wishes to get his valuable advice and guidance to the Federation in the days to come. The National Executive places on record its unstinted gratitude to Comrade M.Krishnan for his able leadership to the historic organisation of NFPE not only as Secretary General but in numerous other capacities as well during his long service.  The Federal Executive further resolves that Com.M.Krishnan will continue to be in the Federal Executive of NFPE even after handing over charge, till the next Federal Council meeting to be held in May 2016.
II.          RESOLUTION ADOPTED BY CWC MEETING OF AIPEU GROUP - C (CHQ)
RESOLUTION ON THE SERVICES OF COM. M.KRISHNAN, GENEARL SECRETARY, AIPEU GROUP-C CHQ & SECRETARY GENERAL NFPE/CONFEDERATION
The Central Working Committee of All India Postal Employees Union Group ‘C’ (CHQ) held in Ongole (Andhra Pradesh) from 22.8.2014 to 24.8.2014 unanimously appreciates the sincere, superb and outstanding services rendered by Com. M. Krishnan as General Secretary of AIPEU Group ‘C’ (CHQ) and Secretary General of NFPE & Confederation during his tenure and like to place on record our whole hearted compliments,greetings and commendations to him and also acknowledge and recognize him for his unparalleled and appreciated service, which definitely resulted in charming the organization to new heights and also in settling many of the long pending demands of the Postal employees, especially Postal Group ‘C’ staff.

Com. M. Krishnan’s contributions in enhancing the prestige and image of AIPEU Group ‘C’ and thereby NFPE as well as the Confederation, will be remembered forever. In order to strengthen the organization and also to enhance the organizing capacity of the rank and file leaders the P3 CHQ  & NFPE CHQ under the leadership of Com. M. Krishnan is maintaining constant communication with the general membership through website and also the Bhartiya Post and Postal Crusader monthly journals. The Trade Union classes and workshops organized by Com M.Krishnan, General Secretary for the NFPE and the Confederation has also contributed to a great extent in improving the quality of the organization. The need of the unity amidst the working class of all sections as well as Government employees, organized and unorganised workers, he preached and also practiced during his tenure upsurge him to the  standard of a great statesman and a living legend. It is only Com M. Krishnan, who spends more than 20 hours daily for the working class all along during his tenure.

Com. M.Krishnan is a vivacious, vibrant,meticulous hard working and fully committed leader and is always working for the upliftment and welfare of the Postal employees, especially most down-trodden three lakhs Gramin Dak Sewaks. He has also extended his helping hand to all affiliated unions of the NFPE as the Member and then Leader of the JCM (Departmental Council) Staff side. He is also the All India Secretary General of the Confederation of Central Government Employees & Workers and is at the forefront in implementing all the programmes of the Confederation. The two days strike in February 2014 demanding the formation of the Seventh Pay Commission cut the ice and is one of the milestone in the history of the CG employees’ movement.

Com M.Krishnan has pioneered and crusaded his best in making the General Strikes conducted as per the call of Central Trade Unions and other Federations including NFPE against the anti-people and anti-worker policies of the Govt. a grand success in the Postal Sector. As the Secretary General, National Federation of Postal Employees he built the unity of all the Postal employees and conducted various trade union actions which have prevented the adverse effect of implementation of the new economic policy in the postal sector and to save the postal service as a public utility service. The mass recruitment to the extent of 30% and more in the postal is the major advancement of the Federation for which the skill and negotiating capacity of the Secretary  General NFPE Com M. Krishnan are fully exploited. The fight against closure of 9797 Postoffices and 300 RMS offices in the name of McKincey Consultancy’s recommendation, the campaign against the New Postal Policy and the move of the Govt. to privatise postal services by granting licence to Courier Services, the Cadre Restructuring agreement etc are examples of his uncompromising stand, hard-bargaing and negotiating skill. His capacity to make inspiring and educative speeches and also taking class are worth emulating.

This Central Working Committee of this Union, while saluting Com. M. Krishnan for his devoted and dedicated service to the Central Govt. Employees and Postal employees, especially to the CHQ of AIPEU Group ‘C’ hereby resolved to utilize the valuable and experienced services of Com. M. Krishnan in the AIPEU Group ‘C’ (CHQ) till the next All India Conference to be held in June 2015.
III.  E.MAIL RECEIVED FROM SHRI.D.THEAGARAJAN, SG, FNPO.
In regard to the services rendered by Sri M.Krishnan to the employees, I am unable to find words to express my appreciation towards him. In the last few years my relationship with him is very cordial and it became useful to the Postal employees.  His manner of approaching official side with the issues of staff is bold as well as of positive nature .
So far I do not find negative attitude in him during the negotiation with official side. The retirement of Shri  M.Krishnan from the Department is a great loss to the Postal employees in particular and  central government employees  in general .
In fine , I feel that a good friend of mine is retiring from the service.. I pray to  the Almighty to shower blessings on him and his family members to give happiness and prosperity
Posted by AIPEU GUJARAT at 6:40 PM No comments:
Newer Posts Older Posts Home
Subscribe to: Posts (Atom)