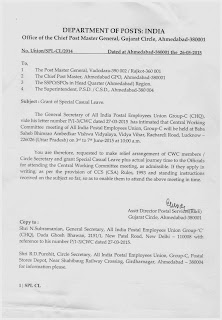 
EMAIL TO BE PUT UP TO HON.CPMG. HON.DPS HQ AND AD R&E

Hon.sir,
The taxt dates and details of meetings everything is wrong in the memo for special casual leave.

This is very serious error, lethargy and casual approach to important matter.  Responsible official must be strictly instructed and shifted from union branch considering that if any operative office commits such error, administration counters very strictly.

No brain is applied even in preparing letter by copy and paste.

During last 4-6 months, no union letter is being acknowledged and replied. Previous memorandum on problems of HQ region also remains unattended. It was handed over to Shri.V.B.Patel AD at the last bimonthly meeting.

For no reasons all DHs were asked to start verification of membership under check off system and last date was fixed as 28th April 2015. Letter of authorisation were also sent. In fact no such action were to be initiated at Circle/Divisional level as last dates for making application by unions to the department for participation in the process was revised as 30 April 15. Due to wrong directions of CO our divisional office bearers had to run here and there to collect letter of authorisation. From the very first day, I wrote Email/letter that CO has issued wrong and unwarranted instruction but after long struggle and repeated mails instructions were issued to stop process. Sirs, how serious and adversely effecting instructions were isduef! Had there been a proper dealing assistant, such major mistake would not have occurred. Our divisions hired cars, visited offices and collected letter of authorisations. I assume that it might have caused expenditure of total more then 1.5 lacs rupees. Please identity responsibility and reasons and take suitable action under our knowledge and also ensure corrective measures.

Previously Shri.Raval was working as OA in union branch of CO. He did not know to even send or open email. Now when I repeatedly call C.O. I am replied that there is no OA for union branch..!!

Since last one week I had to struggle hard and sent so many mails for issue of memo for grant of Special CL. I did not receive any response or reply. Our All India Conference will be held at Lucknow on 4 to 7 June. CWC will be held on 3-6-15. Delegates will be starting journey on 1st June/2nd June. Divisional heads were not granting special CL saying that Memo from CO is not received. Some delegates work in single handed offices. They are to be relieved by deputations from other offices. All this require at least 3-4 days time but there was no response and no action by CO despite my daily Emails. Now at the very last day I received news that memo is despatched. I requested for soft copy so that I can publish it on our blog/website. I also urged for sending Emails to all divisions but I was shocked to know that one official is dealing union branch but she does not know how to send Emails!! So sorry to know value and treatment of union branch. I requested Shri. Apurva Kadia CS Admn, at last, to help me and manage to send Email to me or photo on whatsApp. He helped and then also I was shocked that there is no mention of All India conference in the memo. Dates are wrongly shown as stated in beginning.

Sir, please set right union branch and ensure due care and response. Pl alsobfind out above said memorandum and all previous emails which are not at all attended and not even acknowledged.