India Post will set up special counters in areas that do not have access to basic postal services. The move aims to bridge the rural-urban divide by promoting financial inclusion in interior areas.

As a first step towards this, the postal department will carry out a study on the distance people need to travel to reach to a post office. The study, which will arrive at a base figure, will assess the reach of the postal department in realistic terms and determine the areas that are under-served. The department expects to finish the study by the end of the year.

"The figures, which will be derived on a notional basis, will help the department make an estimation of its accessibility on a nationwide scale," said an official in the ministry of communications and information technology.

There are over 1.5 lakh post offices in the country, of which 1.39 lakh are in rural areas while almost 16,000 are in urban areas, according to data up to March 2010. On an average, each post office serves 7,176 people and covers an area of approximately 21.21 sq km. India Post has initiated several steps to expand its reach. Presence of post offices is key to the success of several government plans aimed at financial inclusion.

Apart from lending connectivity, post offices play a major role in bringing basic financial services like banking and insurance to remote areas. "Lack of post offices in any area virtually cuts down its connectivity with the rest of the country. So, it is important that we assess our reach and take steps to narrow down the deficiencies wherever they exist," the official said, requesting anonymity. To increase its footprint, India Post has set up franchisee outlets in areas where having a post office is not feasible.

SUBMISSION OF CHARTER OF DEMANDS ACCOMPANIED BY AGITATIONAL PROGRAMME BY JCA 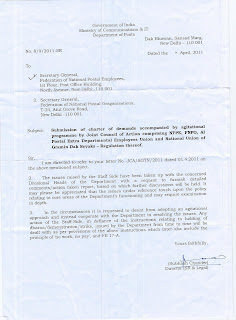