FLASH NEWS : Regarding grant of enhanced bonus of 7000 to GDS

Regarding grant of enhanced bonus of 7000 to GDS, Com. R. N. Parashar, Secretary General, NFPE discussed with Chairman, GDS Committee, Shri Kamalesh Chandra today (29.09.2016). Chairman informed that he had recommended for payment of bonus to GDS at the enhanced calculation ceiling of Rs. 7000/- and the file returned to Postal Board. (Last time Nataraja Murthy Committee has recommended that GDS should not be paid enhanced bonus and their bonus should be reduced to 50% of the departmental employees). Now that, GDS committee has recommended 7000, Postal JCA has demanded Postal Board to issue bonus orders of GDS with calculation ceiling of 7000/- without any further delay.
Posted by AIPEU GUJARAT at 5:56 AM No comments:

Com. Deshraj Sharma was a legendary leader with strong determinations, strong voice and strong personality. He was unique and incomparable. All of us had special feelings, respect and love towards him as a union leader.  So far as Gujarat concerns, He was like a family member for many of us. He was calling each & every active union members by name. Gujarat circle mourn over sad demise of one of the most beloved leader. At various big offices, staff from all wings are paying homage to Com. Deshraj. He has created a space in our heart which can't be replaced and for us, he is always alive with us with eternal memories. 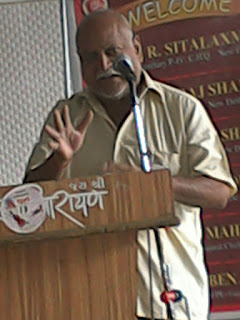 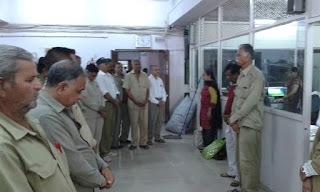 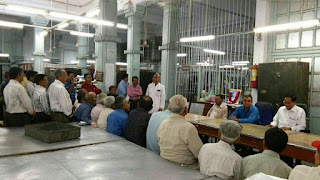 Posted by AIPEU GUJARAT at 8:30 PM No comments:

Central Govt has a proposal to Pay 1% DA from July as an interim Measure.

Posted by AIPEU GUJARAT at 5:16 PM No comments: 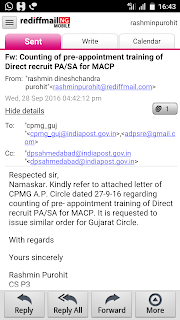 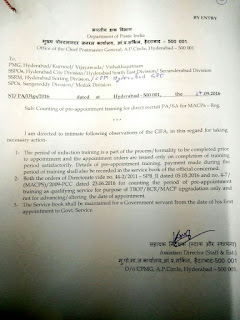 Posted by AIPEU GUJARAT at 5:06 PM No comments:

Railway Employees Bonus – 78-day PLB @ Rs.7000 p.m. will be made to all the Group `C’ and `D’ railwaymen well before Pooja Festival

The Addl. Member Staff Railway Board, Shri Anand Mathur, has intimated today, i.e. 26.09.2016, AIRF leadership that, Railway Board’s orders for Restructuring of Technicians, to which an agreement was arrived at in Full Board Meeting held on 22.07.2016, will be issued in this week, and payment of 78-day PLB @ Rs.7000 p.m. will be made to all the Group `C’ and `D’ railwaymen well before Pooja Festival.
Posted by AIPEU GUJARAT at 10:58 AM No comments: 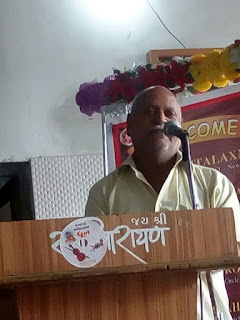 AIPEU Gujarat expresses its deep sorrow over the shocking news of demise of comrade *Desraj Sharma* former GS P4 NFPE at about 9.00 P.M today. He was hospitalized after a cardiac arrest and undergoing treatment. Suddenly he had another attack and breathed his last.

Comrade Desraj was also holding positions of Treasurer and Deputy Secretary General NFPE in the past. Known as the close disciple of Comrade Adinarayana, comrade Desraj Sharma was succeeded Comrade Ashok Bhattacharjee as the GS of P4.

We express our grief over sad demise of one of the most dynamic and Jaabaaz leader comrade Desraj Sharma.

Rashminpurohit@rediffmail.com
Posted by AIPEU GUJARAT at 11:39 PM No comments:

A panel set up by the Central government to look into proposals pertaining to allowances of government employees, including defence personnel, made by the 7th Central Pay Commission (CPC) is likely to submit its report shortly, raising expectations for about 1 crore individuals.
The announcement of the panel to be headed by Finance Secretary Ashok Lavasa was made on June 29, 2016 when the government accepted the salary hike rates as proposed by the pay commission.


An online platform called The Sen Times claimed that the committee has finalised its report and is likely to submit the same “this week”, citing government sources. It also said that the quantum of allowances may not vary from those proposed by the CPC.
“The committee on allowances is likely to stick with the 7th Pay Commission’s recommendations on allowances,” The Sen Times quoted the sources as saying.
The 7th CPC had recommended scrapping 51 allowances and subsuming another 37 after examining the existing 196 allowances that are currently paid.
Given the significant changes in the existing provisions for allowances which may have wide ranging implications, the Cabinet had decided to constitute a committee headed by Finance Secretary for further examination of the recommendations of 7th CPC on Allowances.


“The Committee will complete its work in a time bound manner and submit its reports within a period of 4 months. Till a final decision, all existing Allowances will continue to be paid at the existing rates,” an official statement issued by the finance ministry said.
The government has already released the salary and pension arrears for the period January to July 2016 and started paying salaries after factoring in the hike from August onwards. A decision on payments to the armed forces was taken recently.
The recommendations of the 7th CPC are applicable to 47 lakh central government employees and 53 lakh pensioners, of which 14 lakh employees and 18 lakh retirees are from the defence forces.


The acceptance of the salary hike proposals by the Narendra Modi government had triggered similar pay hike by Central public sector undertakings (CPSUs) who joined the nationwide strike on 2 September, 2016.
Besides, employees of state governments have also started similar pay revision. The Karnataka government have almost accepted the demand made by the 6.40 lakh state government employees for appointing a panel to consider salary hike.
Source: International Business Times
Posted by AIPEU GUJARAT at 4:53 PM No comments:

Circle Union demanded urgent meeting on cadre restructuring as well as on abolition of posts in PA cadre. 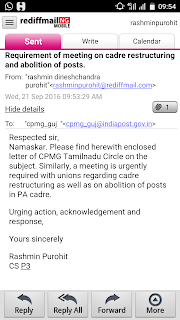 Posted by AIPEU GUJARAT at 11:04 PM No comments:

Observance of “Joy of Giving Week” between 2nd and 8th of October, 2016-Appeal to officers and staff members