ADVANCES TO GOVERNMENT SERVANTS - RATE OF INTEREST FOR PURCHASE OF CONVEYANCES

MINISTRY OF FINANCE ISSUED ORDERS GRANTING ONE TIME MEASURE INCREMENT ON 1.1.2006 FOR ALL OFFICIALS WHOSE INCREMENT FELL DUE BETWEEN FEBRUARY AND JUNE 2006

http://www.finmin.nic.in/the_ministry/dept_expenditure/notification/misc/DateofIncrement_RevPayRules2008.pdf
Posted by AIPEU GUJARAT at 10:30 AM No comments:

Ministry of Personnel, Public Grievances & Pensions
As per extant practice CVC is consulted at two stages, viz., for the first stage advice as to whether evidence collected during the preliminary inquiry merits either a major or a minor penalty in Disciplinary proceedings. After conclusion of the Inquiry, the case records are again referred to the CVC for the second stage advice on the basis of charges held to be partly or fully proved or not proved.
Details of number of advices tendered by the Commission in respect of officials of Central Government etc. at the first stage during the last three years i.e. 2009, 2010 and 2011 is as under:-

Further, after completion of proceedings, the Commission tenders advice on the nature of penalties or otherwise on references received from the organizations. Such advices are termed as second stage advice. The nature of advice tendered/penalty advised by the Commission during the year 2009, 2010 and 2011 is as under:
This information was given by the Minister of State in the Ministry of Personnel, Public Grievances and Pensions Shri V. Narayanasamy, in written reply to a question, in the Lok Sabha today.PIB
Posted by AIPEU GUJARAT at 10:27 AM No comments:


Ministry of Personnel, Public Grievances & Pensions
Action against Corrupt Officers
The CBI seeks sanction for prosecution of Government Servants in respect of Prevention of Corruption Act cases under section 19 of the Prevention of Corruption Act, 1988. As on 31.10.2011, there are 189 number of requests for prosecution sanction pending with various Central Government Ministries/Departments/State Governments. Details of these cases are enclosed at Annexure ‘A’.
During the year 2011, CBI has filed charge-sheets against 782 public servants in Prevention of Corruption Act cases. According to information furnished by CBI, sanction for prosecution has been denied by different departments in respect of 85 numbers of public servants during the year 2011.
There is no centralized data reflecting the reasons for denial of such sanctions. Such denial is generally based on merits of individual cases by the concerned Disciplinary authority.
Several steps have been taken by the Government to combat corruption and to improve the functioning of Government. These include:-
(i) Issue of Whistle Blowers Resolution, 2004 and the introduction of the Public Interest Disclosure and Protection to Persons making the Disclosure Bill, 2010 in the Parliament;
(ii) Enactment of Right to Information Act, 2005;
(iii) The pro-active involvement of Ministry/Department through Annual Action Plan on Vigilance as a preventive measure;
(iv) Issue of comprehensive instructions on transparency in tendering and contracting process by the CVC;
(v) Issue of instructions by the CVC asking the organizations to adopt Integrity Pact in major Government procurement activities; Similar instructions have been issued by the Central Government on 16th June 2009 advising the State Governments to adopt Integrity Pact in major procurements;
(vi) Introduction of e-Governance and simplification of procedures and systems;
(vii) Issue of Citizen Charters.
(viii) Acceptance of the First Report of the Group of Ministers to consider measures that can be taken by the Government to tackle corruption.
(ix) Introduction of the Lokpal Bill, 2011 in the Lok Sabha.
(x) Ratification of United Nations Convention Against Corruption (UNCAC).
(xi) Introduction of the Prevention of Bribery of Foreign Public Officials and Officials of Public International Organizations Bill, 2011 in the Lok Sabha.
(xii) Introduction of the Judicial Standards and Accountability Bill, 2010 in the Parliament.
(xiii) Placing details of immovable property returns of Members of the All India Services and Group ‘A’ officers of the Central Government in the public domain.
This information was given by the Minister of State in the Ministry of Personnel, Public Grievances and Pensions Shri V.Narayanasamy in written reply to a question in the Lok Sabha today.PIB
Posted by AIPEU GUJARAT at 10:27 AM No comments:

Posted by AIPEU GUJARAT at 10:26 AM No comments: 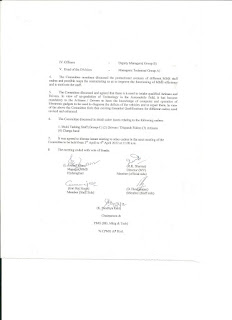 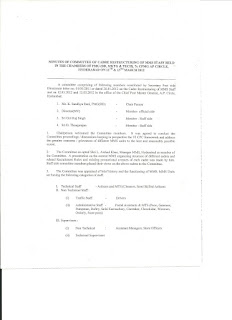 Posted by AIPEU GUJARAT at 10:21 AM No comments:

SCHEME FOR ENGAGEMENT OF GDS ON COMPASSIONATE GROUNDS-MERIT POINTS AND PROCEDURE FOR SELECTION-REVISED PROVISIONS THEREOF.


D.G. Posts No. 17-17/2000-GDS dated 09Mar 2012.
A reference is invited in this Directorate letters of even number dated 14 Dec 2010 and 01 Aug 2011 vide which the scheme for engagement of GDS on compassionate grounds with merit points & procedure for selection as modified was circulated and made effective for all the compassionate engagement cases to be considered on or after 01.01.2011.
2. The scheme has recently been reviewed in this Directorate and in partial modification in the existing provisions of the Scheme, the following provisions are hereby ordered to be substituted with the approval of the competent authority:
(a) The attribute of assessing indigence appearing at Ser 7- Educational Qualification of Applicant on Page 3 of this Directorate letter No. 17-17/2010-GDSdated 14.12.2010 is deleted.
(b) The attribute of assessing indigence appearing at Ser 2- Outstanding liabilities for Education/Marriage of dependent children on Page-2 of this Directorate letter No. 17-17/2010-GDSdated 14.12.2010 is substituted as under:
(c) The attribute of assessing indigence appearing at Ser 6-Discharge Benefits i.e Ex-gratia gratuity ,Severance Amount, Service Discharge benefits under NPS Lite and Group Insurance Benefits received by family on Page 3 of this Directorate letter No. 17-17/2010-GDSdated 14.12.2010 is substituted as under:
(d) The word “Proposed” appearing under Criteria 1,3,5,& 6 on page 2&3 of this Directorate letter No. 17-17/2010-GDSdated 14.12.2010 may be taken as deleted.
(e) Apart from the above cases where the wife of the deceased GDS has applied for compassionate engagement for her, she shall get 15 additional points as grace points. This is the line with the general principle that the widow needs to be give preference for compassionate engagement. Such grace points shall not be permissible in the widower applicant.
3. All other provisions contained in the Scheme dated 14.12.2010as further modified under letter of even number dated 01.08.2011 shall continue to apply as already prescribed and all compassionate engagement shall be approved with in the ambit of the prescribed Scheme only. It is reiterated that the existing criteria of 50 Points and above for adjudging hard and deserving cases stands.
4. The above changes shall take effect from the date of application of the original Scheme. All cases which were considered & rejected by the CRC based on the earlier provisions of the new Scheme may be reconsidered afresh based on application of the revised criteria within the time frame allowed under Para7 (e) of the Directorate’s letter No. 17-17/2010-GDSdated 14.12.2010 as fresh cases subject to availability of vacancies in the division concerned in view of removal of ceiling of 10% already without further reference to this Directorate.
5. Pursuant to the provisions now revised where the widow now applies for the compassionate engagement following rejection of the case of one of her child case may also be taken as a fresh case to be considered as per the new Scheme as modified. Thus before the already rejected cases are reconsidered the widow may be given an option to be exercised in writing within one month of date of receipt of the communication to be issued by the Circle treating the application of her child as withdrawn & consideration of her application afresh to follow in due course . Where such as option is exercised, the already rejected application of her child may be considered and her fresh application may be got processed expeditiously.
Sd/
(Surender Kumar)
Assistant Director General (GDS)
Posted by AIPEU GUJARAT at 10:18 AM No comments:

Direct Tax Code (DTC) and Its impact on salaried people

http://tkbsen.com/2012/03/direct-tax-code-dtc-and-its-impact-on-salaried-people/?utm_source=feedburner&utm_medium=feed
Posted by AIPEU GUJARAT at 10:17 AM No comments:


CADRE RESTRUCTURING COMMITTEE FOR MMS:
First meeting will be held in Hyderabad on 12thMarch 2012 to 13thMarch 2012 under the Chairpersonship of Smt Sandhya Rani PMG (BD) Hyderabad. Staff Side proposal (NFPE/FNPO) will be submitted during the meeting; Com. Giri Raj Singh (R-3 NFPE) and Com. D. Theagarajan (R-3 FNPO) are the Staff Side members in the committee. RMS/MMS Br./Divisional Unions (NFPE) are requested to submit their proposals to Com. Giri Raj Singh.
IPO EXAMINATION RESULT READY:
It is gathered that IPO examination is ready but due to some court cases filed by Postmaster’s Cadre Officials, it is being delayed. Result will be declared after sorting out the court cases related issues.
REVISED RECRUITMENT RULES FOR HSG I:
UPSC has approved revised recruitment rules for HSG I. after several rounds of discussions with our officers. The Department of Posts has fulfilled the requirements of the UPSC. Now the file may go to Law Ministry .After that our Department will issue gazette notification notifying the revised recruitment rules for HSG I
ADHOC ARRANGEMENTS FOR HSG I:
Department approached DOPT for approval of adhoc arrangements for HSG I. Approval is expected with in a week formal orders likely to be issued shortly.
Posted by AIPEU GUJARAT at 10:15 AM 1 comment:


Chennai, Mar 9, 2012(TNN): After waiting for 30 years, close to 150 employees of the postal department will finally become regular employees, thanks to the intervention of the Central Administrative Tribunal ( CAT). A bench of G Shanthappa, judicial member and R Satapathy, administrative member, passed orders on the matter.
The applicants were appointed mazdoors with the department of posts in 1982. While joining, they were assured that their services would be regularised. Based on directions in a Supreme Court judgment, the department introduced a scheme in 1991 which stipulated that all casual labourers who worked for eight hours a day for 240 days every year as on November 29, 1989 would be conferred temporary status.
Those who were granted temporary status and had worked for three consecutive years would be conferred with 'Group D' status. These employees – who are now called multi-tasking staff – would be eligible for pension and other service benefits.
When they approached the tribunal in 2010, they were directed to make individual representations to authorities by listing out their grievances. But their claims were rejected mainly on two grounds – that they were overage and that they did not have the qualification.
When their fresh applications came up for hearing, M Ravindran, additional solicitor general who appeared for the Union government, said authorities did not have any objection to regularise their services.
The bench said there "cannot be any hindrance for the absorption of applicants" who have been working for so long. "It has also come to our notice that there are enough vacancies to accommodate the applicants before us," the bench said.
Authorities were directed to consider regularising these applicants and give age relaxation and training for those who did not possess matriculation skills within three months.
Posted by AIPEU GUJARAT at 10:14 AM No comments:


FEDERAL EXECUTIVE OF NFPE
IT IS HEREBY NOTIFIED IN ACCORDANCE WITH ARTICLE 12 OF THE CONSTITUTION OF NFPE THAT THE MEETING OF THE FEDERAL EXECUTIVE OF NATIONAL FEDERATION OF POSTAL EMPLOYEES SHALL BE HELD AT NFPE OFFICE 1st FLOOR NORTH AVENUE POST OFFICE BUILDING, NEW DELHI ON 21st MARCH, 2012. THE MEETING SHALL COMMENCE AT 11 A.M. ON 21.03.2012.
Posted by AIPEU GUJARAT at 10:14 AM No comments: