DISCUSSIONS ON THE PENDING JCM SUBJECTS IN THE JCM (DC) STANDING COMMITTEE MEETING HELD IN 23.08.2013

DISCLOSURE OF PERSONAL INFORMATION UNDER THE RTI ACT, 2005(Click the link below for details) 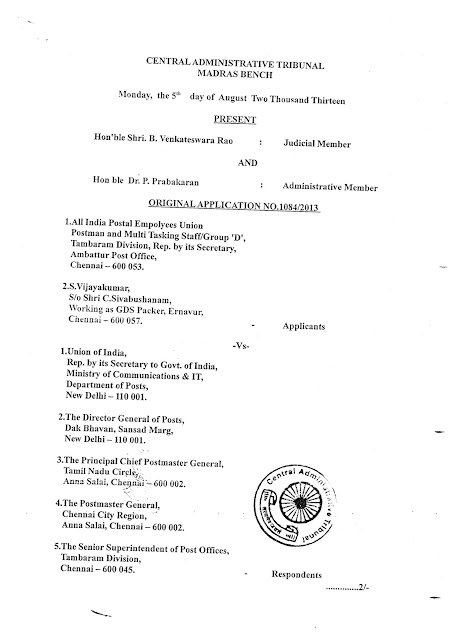 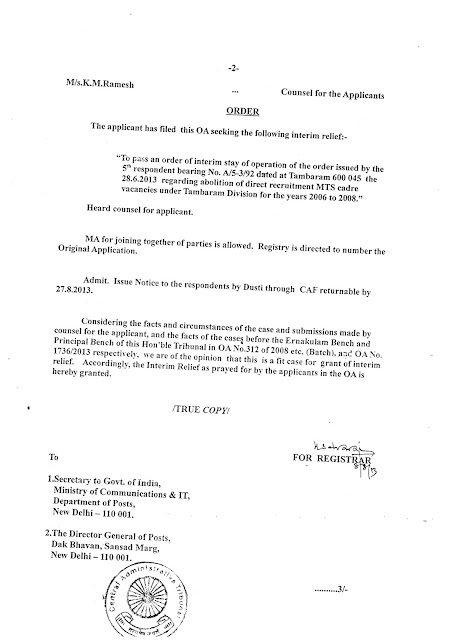 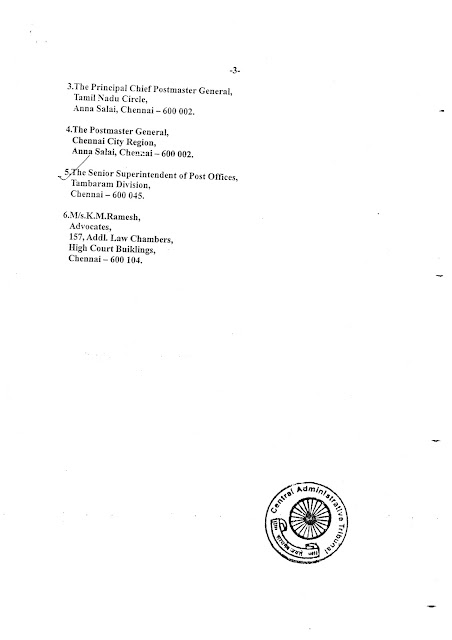 Posted by AIPEU GUJARAT at 11:27 AM No comments: 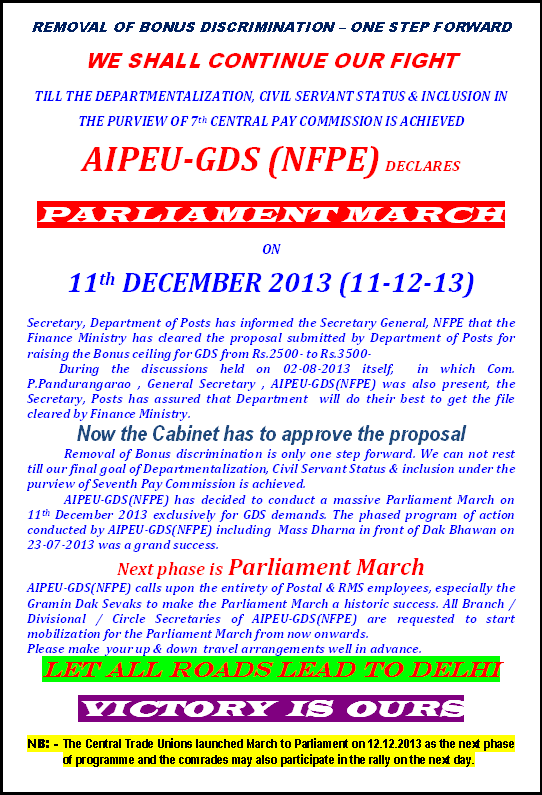 Posted by AIPEU GUJARAT at 11:26 AM No comments:

Posted by AIPEU GUJARAT at 11:26 AM No comments:

http://4.bp.blogspot.com/-jlKfIDcXLik/UhZLHoXd12I/AAAAAAAACOM/cumNfXOAGK0/s1600/GDS-substitutearrears-clfn.JPG
Posted by AIPEU GUJARAT at 11:25 AM No comments:

No NFPE/Northern Zone Study Camp /13                         Dated 23rd August 2013
To
All General Secretaries / NFPE Office Bearers
All Circle Secretaries of NFPE affiliated unions of U.P. & Uttarakhand Circles.
Dear Comrades,
As you are aware the South Zone Study Camp of NFPE was held at Chennai and Central Zone Study Camp was held at Vidisha (M.P)& Eastern Zone Study Camp was held at Guwahati successfully. Western Zone Study Camp is being held at Pushkar (Rajasthan) on 25th & 26th August, 2013.  The next camp for Northern Zone will be held at Ghaziabad (U.P.) on 21st & 22nd September, 2013. Delegate from affiliates of NFPE from U.P. & Uttarakhand   shall participate in Northern  Zone Study Camp.
The number of delegates allotted to each circle union is furnished as below:
In addition all General Secretaries of the above unions shall attend the camp.
Circle Secretaries are requested to select the delegates of their unions immediately and instruct them to book the up and down tickets without any further delay.  They should reach Ghaziabad  before 08-30 A M on 21st and   22nd September ,2013. They can leave the camp only after 6 PM on 22nd September 2013.  Maximum lady comrades may be included as delegates. The names of the delegates attending the camp should be intimated to the respective General Secretaries before 31st Aug 2013. Programme will be intimated separately.
A Seminar on Postal Services will be held in connection with Study Camp. Senior Officers of the Department of Posts will address the Seminar. Special casual leave will be granted to the delegates for attending Seminar. Details will follow.
Delegate fee per head is fixed as Rs 600/- (Rs six hundred only).
All General Secretaries are requested to instruct their circle Secretaries suitably to immediate follow up action.
Fraternally yours,

(M. Krishnan)
Secretary General
Posted by AIPEU GUJARAT at 11:24 AM No comments:

Union Minister of State for Personnel, Public Grievances & Pensions and Prime Minister’s Office Shri V Narayanasamy has said that rtionline web portal is another milestone in the regime of RTI that will further promote participation of our citizens in the process of governance and policy making decisions of the Government.Speaking at the launch of the portal in New Delhi today he said though presently this facility has been provided to Central Ministries, DoPT will consider extending this facility to the subordinate and attached offices of Central Government also. The Minister also appealed to the State Governments to consider developing similar facility of filing online RTI applications. Referring to the RTI Act as one of the biggest achievements of our democracy, Shri Narayansamy said that it has empowered the citizenry in an unprecedented manner to participate in nation building by promoting transparency and accountability in the working of every public authority.
The rti online web portal has been developed by National Informatics Centre (NIC) at the initiative of Department of Personnel and Training. The url of this portal is https://rtionline.gov.in.
This is a facility for the Indian Citizens to file RTI applications online and first appeals and also to make online payment of RTI fees. The prescribed fees can be paid through Internet banking of State Bank of India and its associate banks as well as by Credit/Debit cards of Visa/Master, through the payment gateway of SBI linked to this site. This facility is available for all the Ministries/Departments of Govt. of India.
This system provides for online reply of RTI applications/ first appeals, though reply could be sent by regular post also. This system works as RTI MIS also. The details of RTI applications received through post could also be entered into this system. The citizens can also check the real time status of their RTI applications/first appeals filed online.
Posted by AIPEU GUJARAT at 11:24 AM No comments:

LGO EXAMINATION FOR THE YEAR 2013 WILL BE HELD ON 15TH SEPTEMBER 2013. CLICK HERE FOR DETAILS

https://docs.google.com/document/d/1mAfNF7xlP6AWItz5BsnUnSdGFw8c-jr_X-RJGjrZdMI/edit?pli=1
Posted by AIPEU GUJARAT at 11:23 AM No comments:

CONDUCTING OF LIMITED DEPARTMENTAL COMPETITIVE EXAMINATION FOR PROMOTION OF TO THE CADRE OF INSPECTOR POSTS (66.66%) DEPARTMENTAL QUOTA FOR THE YEAR 2013- REVISION IN THE EXAMINATION SCHEDULE CLICK HERE FOR DETAILS

No. 28-8/2011-D
Government of India
Ministry of Communications & IT
Department of Posts
(Mails Division)
Dak Bhawan, Sansad Marg
New Delhi-110001
Dated 13.08.2013
Sub: Revised Establishment Norms for Operational Activities at Speed Post Sorting Hubs. Intra-Circle Hubs and Computerized Registration.
Attention is invited to the Directorate O.M. of even no. dated 17.01.2013 vide which revised norms for operational activities at Speed Post Sorting Hubs, IC Hubs and CRCs was circulated.
2.         Reference were received as to whether the revised norms of sorting circulated vide O.M.  referred to above were to be considered as productivity norms or establishment norms . It is clarified that the establishment norms for operational activities the than that for “Sorting of Articles” would be the same   as circulated vide Directorate OM of even no dated 17.01.2013. Establishment norms for “Sorting of Articles” has been fixed as 0.079 minutes per article i.e 760 articles per hour). However, time factor for productivity pertaining to sorting of articles would continue to be o.063per article( i.e 950 articles per hour)
3.         This issues with the concurrence of integrated Finance Wing vide their Diary No. 113/FA/13/CS dated 12.08.2013.
Director (Mail Management)
Posted by AIPEU GUJARAT at 11:22 AM No comments:

Dear Comrades,
It is not fair to need to remind each division for all the time for clearance of Quota to higher ups.

I have received repeated request from Com.R.N.Parashar that Quota is not received regularly by NFPE from divisions of Gujarat Circle. This is not worthy to hear that we are slack in remittance of quota though we receive regular payment from DDOs. We should remit regular Quota to NFPE, CHQ and Circle.

Circle union is also facing financial crises. All DS are requested to take the matter of remittance of quota very seriously and ensure that all outstanding quota is cleared within this week itself.

Quota of Circle Union may directly deposited in bank account in consultation with Circle Secretary or Finance Secretary.

The allocation of Quota upto 30.6.13 will be on old rates and from July onward on on new rates as per revision of subscription @ Rs.50/-.

Rashmin Purohit
CS
Posted by AIPEU GUJARAT at 11:21 AM No comments:

https://docs.google.com/file/d/0B9SttqENSyIOT2h0UW0wWm1JV3c/edit?usp=sharing
Posted by AIPEU GUJARAT at 11:21 AM No comments:

1.    All India Trade Union Education Camp of Confederation of Central Government Employees and Workers will be held at MUMBAI on 2013 November 15th and 16th (Friday and Saturday)
2. All India Women’s Convention of Confederation will be held at NEWDELHI on 2013 November 25th and 26th (Monday and Tuesday)
Detailed Circulars will follow.
(M. Krishnan)
Secretary General
Confederation
Posted by AIPEU GUJARAT at 11:20 AM No comments:
Newer Posts Older Posts Home
Subscribe to: Posts (Atom)