AGAIN A REQUEST FOR REMITTANCE OF OUTSTANDING QUOTA

Dear Comrades,
I have frequently requested for remittance of outstanding quota to Circle Union but there is a poor response. Circle Union started to work from minus balance and due to constant movement of C/S along with other leaders, there is huge expenditure already incurred. You are aware that we conducted two Circle Council Meetings in short period. Routine expenses are also heavy. C/S is under pressure of financial paucity.

Divisions themselves know that their quota is pending so I do not find necessary to publish their names. Be kind enough to let Circle Union run properly and do not handicap financially particularly when each division already gets regular fees from members through concerned Postmasters.

You all are aware, Joint Convention is to be held at Ahmedabad and G/S will stay in Gujarat for two days on our request for conducting staff meetings in all regions. We will try to represent problems like difficulty in the matter of MACP in Vadodara region, embarrassment to staff in fraud cases etc. before competent authorities through our General Secretary.

Circle Union will need some amount for expenditure in connection with this convention as well as tour programs. If any division comes forward to credit advance quota, it will be great help at this juncture.
Posted by AIPEU GUJARAT at 11:13 PM No comments:

Com.P.J.Patel is one of the senior leaders of our organisation. He has been constantly contributing in trade union activity in the division as well as circle. He will retire on superannuation on 31st May,2011. We convey him best wishes for a happy and peaceful retired life and hope that he will remain in touch with the trade union movement and lead historical strike to be commenced from 5th July,2011.

A function for warm farewell to this senior leader will be held at Mahesana on 5.6.11. Previously Joint Convention of Divisional Secretaries of NFPE/GDS/FNPO unions was fixed on 29.5.11 but this date has been changed to 5.6.11. So it will be difficult for many of us who has been invited to remain present to reach Mahesana in time. I tried to yet again get dates of Convention changed but Air tickets of General Secretaries of AIPEU & NAPE Gr.C has already been booked. This inevitable situation. We request Com.P.J.Patel to kindly excuse for this difficulty and also request-fully invite him to come to Ahmedabad after speedy completion of farewell function at Mahesana so that all comrades of Gujarat will also take an opportunity to give a farewell at Ahmedabad in the afternoon session of the Joint Convention.

Posted by AIPEU GUJARAT at 11:00 PM No comments: 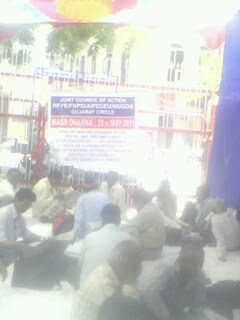 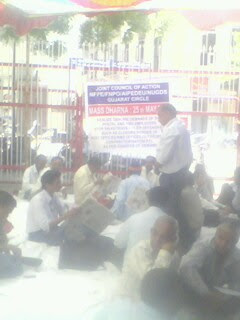 Posted by AIPEU GUJARAT at 12:49 PM No comments:

CONGRATULATIONS TO ALL MEMBERS FOR SUCCESSFUL MASS DHARNA PROGRAM IN GUJARAT CIRCLE ON 25.05.11

As per call of the Central JCA, all divisional secretaries were also called upon to organize ‘Mass Dharna program’ on 25th May, 2011. Successful Dharna program was organized in front of Circle Office, Ahmedabad as well as Regional Offices at Rajkot and Vadodara. We congratulate all members for their direct or indirect contribution in this program.

At Circle Office compound, all Circle Secretaries from almost all unions affiliated to NFPE, FNPO and GDS unions and so many Office bearers from all unions came to make Dharna program a grand success. Every one present here talked about their commitment for unbreakable unity and preparedness for strong trade union action if our voice is ignored by the government. In the recess time a staff meeting was also held and addressed by all Circle Secretaries. About 50 representatives from different unions set on Dharna in front of Circle Office, Ahmedabad throughout the day.

Shri.R.N.Parmar C/S NAPE P.III suggested name of Com. Rashmin Purohit C/S AIPEU Gr.‘C’ as Convener of the Circle JCA but Com.Purohit suggested that Shri.C.P.Nayi C/S NAPE P.IV is also a CHQ President and senior leader so he should be Convener and the suggestion was supported by all C/S and Shri C.P.Nayi was unanimously elected as Convener. All C/S also went under leadership of the Convener Circle JCA to have an informal meeting with the CPMG.

At Rajkot, members in huge numbers were gathered from morning at R.O. compound and their awareness to the trade union movement was immeasurable and appreciable. About 50 employees set on Dharna throughout the day and in the evening also their demonstration, raising hands with slogans and overall deliberation was a sign of successful further agitation cumulating into indefinite strike from 5th July or even earlier.

Special congratulations to members of Kachchh division were also about 150 staff members gathered at 9.30 am and conducted demonstration for half an hour in front of the Divisional Office. A very strong trade union action can be initiated only if we all are observing agitation programs successfully as done in this division.

In other divisions like Porbandar, Amreli, Gondal,Bhavnagar, Junagadh etc Dharna program was organized. Few divisions could organize this program at the evening session only but at this juncture we greet all members for great commencement of agitation and wish that those divisions who could not respond to call of JCA will introspect and ensure that there is no space for any excuse in launching of Indefinite Strike from 5th July, 2011.

All Divisional Secretaries and Circle Office bearers of all NFPE,FNPO,GDS unions will attend a Joint Convention at Ahmedabad on 5th, June, 2011. At that time all should come with names, addresses and telephone numbers of all Divisional JCA members. Com.K.V.Shridharan G/S AIPEU Gr.’C’ and Shri.D.Kishanrao G/S NAPE III will address this joint convention. Com.KVS has agreed to stay in Gujara on 6th and 7th July and staff meetings will be held during these two days. Any division interested to convene meeting in their division may contact Com.Prakash Rathod Circle President on Mob. 099790 90620.

Again, with congratulations to all of you.