A very well arranged Joint conference of all wings at Rajkot was attended by Circle Secretaries of all wings and several retired senior comrades. Few photographs are posted below. Detailed report including names of office bearers elected in the conference will be published on receipt of list from division.

The conference was inaugurated by a paying respect to our most beloved Late Com. Bhagirathsinhji Jadeja. His photograph was placed on the dias and heartfelt homage was paid by keeping two minutes silence. Each and every leaders remembered out late leader very emotionally. Circle Secretary described him as not 'swargastha' but 'hradayastha'. Com. Bhagirathsinhi had presided our previous conference at the same venue.

Com.S.T.Teraiya presided over the conference. A special felicitation was given to Com.S.T.Teraiya by the AIPEDEU leaders on his election as Vice President P.4 CHQ. Circle Secretary congratulated him for his effective leadership in trade union movement.

Com.Tanna President AIPEU Gr.'C' Rajkot division, a senior leader is retiring on superannuation on 31.1.12. His contribution in the trade union movement for long years was acknowledged by the house and he was given a warm farewell.

Office bearers for Divisional Executive Committee of P.3 P.4 and GDS were unanimously elected. We congratulate all office bearers. 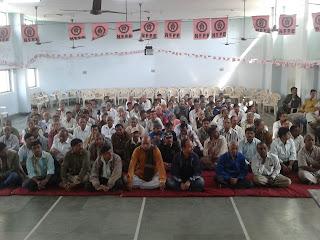 MEMBERS PRESENT IN THE JOINT DIVISIONAL CONFERENCE AT RAJKOT ON 15.01.12 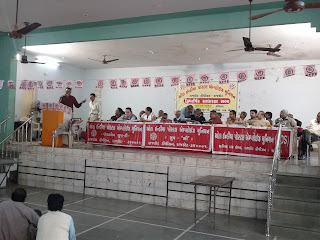 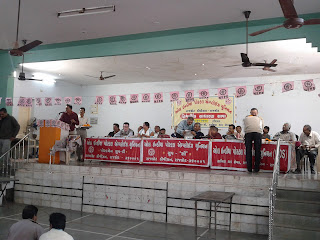 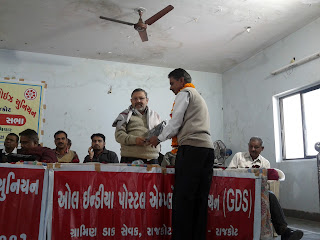