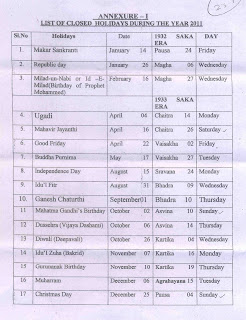 Posted by AIPEU GUJARAT at 10:41 AM No comments:

[TO BE PUBLISHED IN THE GAZETTE OF INDIA, PART-II, SECTION 3,SUB-SECTION (i)]

(Department of Personnel and Training)

G.S.R…..- In exercise of the powers conferred by section 27 of the Right to Information Act, 2005 (22 of 2005) and in supersession of the Central Information

Commission (Appeal Procedure) Rules, 2005 and the Right to Information(Regulation of Fee and Cost) Rules, 2005 except as respects things done or omitted to be done before such supersession, the Central Government hereby makes thefollowing rules, namely:-

1. Short title and commencement. – (1) These rules may be called the Right

2. Definitions.– In these rules, unless the context otherwise requires, -

(b) "Commission" means the Central Information Commission as constituted under sub-section (1) of section 12 of the Act.

(c) "First Appellate Authority" means an officer in the public authority who is senior in rank to the Central Public Information Officer to whom an appeal under sub-section (1) of section 19 lies;

(e) "Registrar" mean officers of the Commission so designated and unless otherwise requires includes an Additional Registrar, Joint Registrar and Deputy Registrar;

(f) "Registry" means the Registry of the Commission comprising the Registrar

(g) "section" means a section of the Act;

have the same meanings assigned to them in the Act.

(a) rupees two for each page in A-3 size or smaller size paper;

(b) actual cost or price of a copy in larger size paper;

(c ) actual cost or price for samples or models;

(d) for inspection of records, no fee for the first hour; and fee of rupees five for

each subsequent hour (or fraction thereof);

(e) for information provided in diskette or floppy, rupees fifty per diskette or

(f) for information provided in printed form, at the price fixed for such

equipment, if any, to supply information;

(h) Postal charges, in excess of rupees ten, if any, involved in supply of information.

are below poverty line as may be determined by respective State Governments.

6. Payment of fee: Fee under these rules shall be paid by way of:

(b) demand draft or bankers cheque or Indian Postal Order payable to theAccounts Officer of the public authority; or

Provided that a public authority may accept fee by any other mode of payment.

8. Documents to accompany first appeal to the first Appellate Authority:

(ii)Copy of the reply, if any, of the Central Public Information Officer.

9. Appeal to the Commission: A person aggrieved by any order passed by the

Authority, may file an appeal to the Commission in the format as given in the

10. Documents to accompany Appeal to Commission: Every Appeal made to

the Commission shall be accompanied by the following documents, duly

(ii) Copy of the reply, if any, of the Central Public Information Officer;

(iii) Copy of the appeal made to the First Appellate Authority;

(iv) Copy of the Order, if any, of the First Appellate Authority;

(vi) An index of the documents referred to in the Appeal.

11. Admission of appeals: (1) On receipt of an appeal, if the Commission is

satisfied that it is a fit case for consideration, it may admit such appeal; but where the Commission is not so satisfied, it may, after giving an opportunity to the appellant of being heard and after recording its reasons, reject the appeal.

appellant had availed of all the remedies available to him under the Act.

(3) For the purposes of sub-rule (2), a person shall be deemed to have availed of

all the remedies available to him under the Act:

had made a final order on the appeal; or

regard to the appeal preferred, and a period of 45 days from the date on which

such appeal was preferred has expired.

12. Procedure for deciding appeals: The Commission, while deciding an

13. Amendment or withdrawal of an Appeal: The Commission may allow a

prayer for any amendment or withdrawal of an Appeal during the course of hearing, if such a prayer is made by the Appellant on an application made in writing.

14. Personal presence of the appellant before the Commission:

(2) The appellant may, at his discretion, be present in person or through his duly

authorized representative or, if permitted by the commission, through video

conferencing, at the time of hearing of the appeal by the Commission.

the appellant is being prevented from attending the hearing of the Commission,

then, the Commission may afford the appellant another opportunity of being heard

15. Presentation by the Public Authority: The public authority may authorize

any representative or any of its officers to present its case.

16. Abatement of an Appeal / Complaint: The proceedings pending before the

Commission shall abate on the death of the appellant.

17. Service of notice by Commission: Notice by name to be issued by the

Commission may be served in any of the following modes, namely:-

(i) service by the party itself;

20. Recovery of Penalty and Payment of Compensation: (1) If a penalty is

compensate a person for any loss or detriment suffered, an order duly authenticated

(2) The Public Authority shall deduct the amount of penalty in such installments as may be allowed by the Commission in its Order and authenticated by the Registrar from the monetary payments due to such person against whom penalty has been imposed by the Commission and compensation shall be paid as per order of the Commission.

21. Recommendation for Disciplinary Action: If disciplinary action is

the provisions of the Act, an order duly authenticated by the Registrar shall be

Commission in its order.

1. Name and address of the appellant

2. Name and address of the Central Public Information Officer

to whom the application was addressed.

3. Name and address of the Central Public Information Officer

who gave reply to the application.

4. Name and address of the First Appellate Authority who

5. Particulars of the application.

6. Particulars of the order(s) including number, if any, against

which the appeal is preferred.

7. Brief facts leading to the appeal.

9. Grounds for the prayer or relief.

10. Any other information relevant to the appeal

11. Verification / authentication by the appellant