Hand Book 2014
RUSH YOUR INDENT
CHQ has compiled Hand Book 2014 with more important orders.  It crosses more than 260 pages. The price will be fixed Rs. 75/- .This Hand Book is a must to all the office bearers and members of our union. All are requested to indent more copies and distribute to all members.
Posted by AIPEU GUJARAT at 11:37 PM No comments:

Com.Y.K.Joshi a young and active office bearer of Bhavnagar has married on 6th December,'13. We could not attend the wedding ceremony due to tour to Guwahati for Central Working Committee Meeting. We convey our best wishes to Com. YK for a very happy married life.
Posted by AIPEU GUJARAT at 11:16 PM No comments:
BIMONTHLY MEETING OF VADODARA REGION WILL BE HELD AT THE OFFICE OF THE POSTMASTER GENERAL VADODARA ON 3RD JANUARY 2014 AT 13.00PM.

ANY DIVISIONAL SECRETARY/MEMBER DESIRING ANY SPECIAL REPRESENTATION ON ANY SUBJECT MAY CONSULT COM.S.M.PATEL WELL IN TIME.
Posted by AIPEU GUJARAT at 11:04 PM No comments: 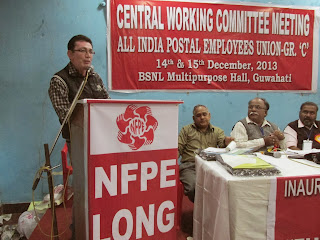 The first Central Working Committee meeting after the last All India Conference was held at Guwahati from 14.12.2013 to 15.12.2013. The National Flag has been hoisted by Dr. Sitanath Shankar, Chairman Reception Committee and NFPE and AIPEU Group ‘C’ flags were hoisted by Com. M. Krishnan Secretary General and Com. R. Sivannarayana CHQ President respectively. Out of 15 office bearers, one office bearer was absent. Out of 22 circles 18 circles have been represented. 5 Mahila Committee members attended. The CWC meeting was presided by Com. R. Sivannarayana, CHQ President. Com. L. P. Saikia, Org. General Secretary and Circle Secretary Assam delivered the welcome address.While observing the proceedings there was serious constructive and proactive discussions held in the CWC meeting.The discussion by the CWC members was lasted for more than 15 hours. The issues related to 7th CPC, Confederation and NFPE programmes, building strong relations between NFPE and AIPEU GDS (NFPE), Cadre Review, MACP related issues, Computer related issues were discussed in detail. The following are the important decisions arrived by consensus in the CWC meeting.

1.      The Confederation decision including strike action for inclusion of GDS demands in 7th CPC, DA merger etc has been endorsed.
2.      The draft memorandum of P3 after its preparation inviting suggestions for the improvement of the same by all rank and file. An exclusive workshop will be conducted to discuss the draft memorandum and finalized thereafter.
3.      The upgradation of pay scale of PA/SA and supervisory posts will be given due importance while drafting the memorandum.
4.      The CWC endorses the decision of Confederation, demanding minimum wage as per 15thILC, 5 year wage revision, DA merger etc. and implement the Confederation programmeson 15 point Charter effectively.
5.      The CWC decided to insist the department to finalise the Cadre Review proposal within one month and in the event of non implementation of the same, programme of action will be finalized after consultation with NFPE and Postal JCA.
6.      The CWC directed all Divisional and Branches as well as the Circle Secretaries to celebrate the Diamond Jubilee of NFPE in a be fitting manner by holding conventions, meetings, recognize the services of old leaders etc.
7.      The CWC requested all the divisions and branches to observe the JCA call on 05.02.2013 by holding one day fast demanding the regularisation of Casual labour and wage revision as per the 6th CPC rate.
8.      The CWC further requested all the branches to assist the All India Postal and RMS Pensioners Association in forming branches at circle and divisional levels.
9.      The CWC further appeals all the Divisions/Branches and Circle Secretaries to form AIPEU GDS (NFPE) at their level and extend fullest cooperation to popularize their demands and programmes of action culminating to indefinite strike if their genuine demand of Departmentalisation and remittance of their case to 7th CPC are not considered.
10.  The CWC decided to issue notice to the defaulting branches to remit Quota dues and other dues like Bhartiya Post and Publications before 10.01.2014 and in the event of non remittance, the CHQ will initiate action either suspending the branch or directing the DDO to remit the amount directly to Circle/CHQ.
11.  Apart from the above to end the Election dispute of Delhi circle, it has been resolved to conduct fresh conference by CHQ itself on the basis of actual membership being existed in the divisions.

In short, the CWC was very constructive in discussing all the issues and decisions taken by consensus. These decisions will be the guiding factor to the CHQ for an effective and efficient functioning. The views and suggestions deliberated by the CWC members have been taken proper note of and they are being taken up with the Directorate and other levels. Com. Zaman, Asst. Circle Secretary delivered vote of thanks.

Com. L.P. Saikia, Circle secretary, Com. Tikan Colida, Circle President and their team made elaborate arrangements for the comfortable stay and delicious food. They deserve all appreciations. The CWC Guwahati ended with a historic success.