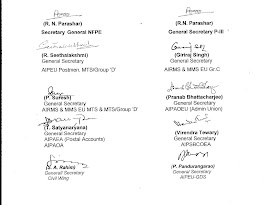 Posted by AIPEU GUJARAT at 6:41 AM No comments:

After the recommendations of the 7th CPC were submitted to the Union Government on 19th November 2015, the news about its implementation was eagerly awaited by the central government employees. Before the submission of the recommendations, the Union Government indicated that the implementation of the 7th CPC will be done from the 1st of January 2016 itself and there will be no question of arrears payment. Instead of that, the government formed an Empowered Committee to analyze the recommendations and extended another four months for the detailed study of it. After the extension, everyone expected, the government will publish the notifications in April 2016. But that was also not happened as the Assembly Elections to five states were announced and now, everyone expects the implementation will take place after the results of the elections.

Now-a-days, the main attraction on the social media is the news about 7th CPC. But there are conflicting reports about the date of implementation of the Pay Commission. Some says, it is from June 2016 and some say, it is from September 2016. But there is no authenticity in these reports.

But for the employees are concerned, they expect an early implementation of the pay commission. They think that the union government is purposely delaying the notifications for the sake of saving money in the form of allowances like HRA and TA which are not calculated in the arrears to be paid to the employees. In the 6th CPC, the same had happened, as there were no arrears paid for the allowances from January 2006 to August 2008, the date of implementation of the Pay Commission.

Now, the Union Government should explain the reasons for the abnormal delay in publishing the notification. As the elections for the states are the main reason, there is no violation of the code of conduct, and permission can be obtained from the Election Commission for the implementation of the 7th Central Pay Commission. It is expected that the government publish the notification after the results of the assembly elections, the Cabinet will pass the bill in July 2016.

Let us hope for the best!!!!!!
Posted by AIPEU GUJARAT at 6:25 AM No comments:
Newer Posts Older Posts Home
Subscribe to: Posts (Atom)