CHENNAI: The Department of Posts will soon set up automated teller machines (ATM) in Chennai GPO and eight head post offices in the city and surrounding areas for its savings bank customers.

Post Master General (Chennai City Region) M. S. Ramanujam said that measures are under way to computerise the transactions of the savings account as part of the department's move to provide core banking solutions. The civil work for establishing the ATMs would begin in about two months. Customers would be able to make use of the facilities by the end of the current fiscal.

Nearly 10 lakh account holders in the nine post offices are expected to benefit from the 24-hour ATM facilities. Once the facility is in place, customers need not spend time waiting at the counters to withdraw cash. With the postal banking services popular among senior citizens, the ATMs would be immensely beneficial to them.

This would also help in cutting down the transaction cost for the department. The Department of Posts is in the process of floating tender seeking bids from ATM equipment suppliers as the facility is being introduced in various postal circles in many States.

Officials of the postal department said that the ATMs to be installed in the HPOs could also be eventually used by the customers who hold accounts with banks. The facilities would be governed by the guidelines prescribed by the Reserve Bank of India.
Such ATM facilities would be set up in the nearly 100 head post offices across the State. The department also plans to extend the service in other post offices across Tamil Nadu in a phased manner depending on the customer response, the officials added.

Source: The Hindu
Posted by AIPEU GUJARAT at 10:21 AM No comments:

https://docs.google.com/viewer?a=v&pid=explorer&chrome=true&srcid=0BxNEVCvnmZdeYjgyODRhZDAtOGZmNy00MDk2LTlhNjAtNWNiMjRiMTI1Yzgw&hl=en_US&authkey=CIGH1MUO
Posted by AIPEU GUJARAT at 10:20 AM No comments:

The Directorate has revised the number of vacancies in respect of Group 'B' exam scheduled to be held on 29.05.2011. For General line it was raised from 10 to 25. In respect of IP line it was reduced to 3 from 32
Posted by AIPEU GUJARAT at 10:19 AM No comments:

https://docs.google.com/viewer?a=v&pid=explorer&chrome=true&srcid=0BxNEVCvnmZdeYzAzYjE5YjQtZmIxNS00ODlkLThlNWUtY2ZkMDZiM2Y2MThl&hl=en_US&authkey=COGH6mg
Posted by AIPEU GUJARAT at 10:17 AM No comments:

Posted by AIPEU GUJARAT at 10:11 AM No comments:

Posted by AIPEU GUJARAT at 10:09 AM No comments:

To,
All Chief Postmasters General

Sub: Limited Departmental Competitive Examination for Postmaster Grade – I – Crucial date for deciding the qualifying service for the Examination – regarding

2. Clarification has been sought by certain Circles regarding the crucial date for assessing the eligibility of Postal Assistants for appearing in the Postmaster Grade-I Examination, 2011 to be held on 12.06.2011.

3. The matter has been examined in the Directorate. As per the Directorate's order No. 13-2/2010-PE.1 dated 25.11.2010, the General line posts would be deemed to have been designated as Postmaster Grade-I, Postmaster Grade-II and Postmaster Grade-III with effect from the dates those are filled up. Therefore it has been decided by the competent authority that the crucial date for assessing the eligibility of the candidates for the purpose of Postmaster Grade-1 Examination 2011, to be filled up on the basis of Limited Departmental Competitive Examination would be the closing date for dispatch of the applications by nodal officers to CMC, ie.18.05.2011. Such Circles, who have prescribed the crucial date other than 18.05.2011, are advised to issue another circular calling for the applications from only such officials, who have become eligible during the period 01.01.2011 to 18.05.2011, by asking them to apply by 2nd June, 2011. Due to paucity of time, the Circles on receipt of applications shall issue hall tickets to the eligible candidates to appear in the examination after consulting the CMC telephonically regarding the Roll Number(s) to be assigned and the venue for examination. It should be immediately followed by a written communication to CMC indicating the names, Roll Numbers so assigned along with a copy of the application submitted by the candidates. In case of any contingency, the Circles may contact DDG(RP) [Tel. No: 23096101]

4. Further, according to the Dept of Personnel & Training OM No: 22011/3/98-98-Estt. (I) dated 17.09.1998, the crucial date for determining eligibility of officers for promotion in case of financial year-based vacancy year would fall on January 1st immediately preceding such vacancy year, the first of the vacancy year, ie. January 1st itself would be taken as the crucial date irrespective of whether the ACRs are written financial year wise or calendar year wise. As such, the crucial date for determining eligibility of Postal Assistants for appearing in the Postmaster Grade-1 Examination to be conducted in the subsequent years ie during the year 2012 and thereafter would be 1st January of the year, to which the vacancies pertain to.

Yours faithfully,
Sd. B P Sridevi
Director (Staff)
Posted by AIPEU GUJARAT at 10:09 AM 2 comments:

LUCKNOW: In some good news for government employees, Lucknow's consumer dispute redressal forum has ruled that government employees who take loans from their departments and pay interest on the sum will henceforth be regarded at par with other 'consumers' of the department.
The ruling was made in response to a complaint made by Ahmad Hussain, a retired official of the postal department. During his years at the department, Hussain took a loan of Rs 69,620 for constructing a house.

The defending party, in this case the Department of Post and its officers, in their counter-affidavit submitted to the forum accepted that Hussain was an employee of the postal department and that he had taken a loan. Officials of DoP also accepted that the complainant had re-paid the loan with an interest amount.

The forum, in the matter, observed that the complainant is a consumer because he took a loan from his department and paid interest on the same. Granting of a loan to an employee was a service given by the postal department to Hussain.

Further, by earning interest on the loan amount the department also made profits on the service rendered.

In such situations, the forum added, despite being an employee of the department, the complainant will also be considered a consumer of the department. Despite the fact that complainant paid back the loan along with an interest, postal department could not return the complainant's document. "This amounts to lack in service," observed the forum. The DoP has now been ordered to not only return Hussain's original documents within a month from getting the certified copy of the forum's order, but also pay him a compensation amount of Rs 5,000 for mental harassment and another Rs 5,000 as litigation cost.

Source: The Times of India
Posted by AIPEU GUJARAT at 10:07 AM No comments:

Pune : The members of postal department employees' joint action committee held a sit-in agitation outside the office of postmaster general Pune on Thursday to protest against the staff crunch and inadequate infrastructure at workplaces. A memorandum of demands was submitted to the postmaster general, demanding an immediate action over it. The task force has threatened to go on an indefinite strike from July 5, if the demands are not considered.

Vilas Deshpande, president of the task force said that the department of post should follow open recruitment process to fill the long pending vacant posts. The Post is facing severe staff crunch and the offices are not equipped with advanced infrastructure. Deshpande criticised the department's move to deploy postal staff to sell the products of private companies at post offices.

Deshpande said, "The department should stop privatisation of work, outsourcing and delivery hubs. The vacancies should be filled immediately. The department should not give work tenders to outside private agencies. It is essential that the common people should receive the post on time. For this, the department should deploy the staff for postal services instead of selling other products."
Around 300 members of Federation of National Postal Organisation (FNPO) and National Federation of Postal Employees (NFPE) participated in the agitation. Secretary of the task force S D Vedpathak and treasurer Y N Kamble also addressed the gathering. 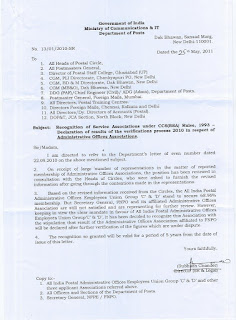 Posted by AIPEU GUJARAT at 9:37 AM No comments:

Posted by AIPEU GUJARAT at 9:37 AM No comments:

Posted by AIPEU GUJARAT at 9:36 AM No comments:

STRENGTHENING IMPLEMENTATION OF THE RIGHT TO INFORMATION ACT, 2005http://persmin.gov.in/WriteReadData/CircularPortal/D2/D02rti/4_10_2011-IR18052011.pd