DISBURSEMENT OF SALARY/WAGES/PENSION TO THE CENTRAL GOVT. EMPLOYEES AND PENSIONERS IN THE STATE OF KERALA FOR THE MONTH OF AUGUST, 2012 ON ACCOUNT OF ONAM FESTIVAL. 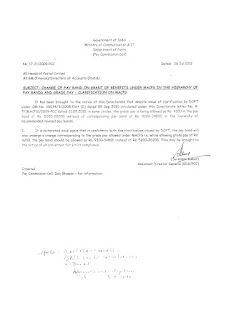 SOME SUGGESTIONS ABOUT THE STATE CONVENTIONS AND DISTRICT CONVENTIONS RECEIVED
IDEAS AND SUGGESTIONS ARE INVITED FROM OFFICE BEARERS AND STATE COMMITTEES
Dear Comrades!
On circulating the draft proposals for holding the State Conventions and other Programmes in preparation of nationwide strike on 12th December, 2012, the headquarters has received two suggestions from the President and the Working President. The suggestions are placed hereunder. More suggestions to make the programmes more successful are invited from National Executive Members and affiliated Organisations and State Committees. We intend placing all such suggestions in the website for the consumption of all concerned and to take a final view shortly - Secretary General Confederation.
SUGGESTION FROM PRESIDENT COM.S.K.VYAS
Dear KKN Kutty
I have gone through the draft proposal regarding campaign programme circulated by you.
As we do not have functioning State Committees of the Confederation in all the States, the programme of district level mobilization/ convention may not be possible in states having no such state committees.
I have therefore suggested during the month of Sept/Oct/Nov 2012 all organization affiliated with the confederation  may be suggested to hold convention inviting office bearers of all primary units Association affiliated with them. such convention would educate these units level leaders of our affiliates on the demands as also the need for strike action on 12.12.2012 they can be asked to go back to their units Association & re-educate & mobilize their membership & motivate them for the Strike action.
My above proposal may please be considered & conveyed to all our affiliates
Yours fraternally
SK. Vyas.
President
SUGGESTION FROM WORKING PRESIDENT COM.K.RAGAVENDRAN
Dear Comrade KKN – Greetings. The proposed State Convention to be addressed by the National Executive Members should be advised to be convened with all Divisional and Branch Secretaries of all Circle level Organisations besides the State / Circle Office Bearers of all the affiliates of the Confederation in one place. This will make these conventions strong in attendance and purposeful in quality. The purpose should be to educate the entire State level and Divisional level leadership  so that they should be able to span out to all Districts / Divisions within their Circle by the Office Bearers of the State Committee of Confederation [if confederation state body exists] and Circle Secretaries and Circle Office Bearers of all Unions to make the District level or Divisional level Conventions more educative and purposeful. The earlier practice of mobilising some employees of different organisations in the headquarters along with some office bearers of Confederation and Affiliates was insufficient for the purpose. I do not mean that ordinary employees in the headquarters city should not attend the convention. They can attend. But the attendance of all Circle Office Bearers of all Affiliates as well as the Divisional and Branch Secretaries of all Divisions / Branches of all Affiliates will make the State Convention a totally successful and purposeful one. This will be possible only if the all India affiliates of Confederation direct their State / Circle organisations to mobilize for such a composition of state conventions.
Posted by AIPEU GUJARAT at 3:22 PM No comments:

https://docs.google.com/open?id=0BxNEVCvnmZdeQjdmRHJSZXZLbXM
Posted by AIPEU GUJARAT at 3:21 PM No comments:

TRANSFER AND POSTING IN SAG OF INDIAN POSTAL SERVICE GROUP ‘A’

https://docs.google.com/open?id=0BxNEVCvnmZdeTXhrckZwS1RFTE0
Posted by AIPEU GUJARAT at 3:21 PM No comments: