ALL DIVISIONAL SECRETARIES AND CIRCLE UNION  OFFICE BEARERS ARE REQUESTED TO ENSURE THAT MAXIMUM NUMBER OF EMPLOYEES JOIN STRIKE AS WELL AS DEMONSTRATION PROGRAMS IN THEIR AREA. PLEASE FURNISH REPORT TO CIRCLE UNION.
NO OFFICE BEARER AT ANY LEVEL SHOULD DISHONOUR  STRIKE CALL.
IT IS OUR DUTY TO CARRY OUT CALL OF OUR CENTRAL HEAD QUARTERS AND FEDERATION.

MORE THAN 20 CRORES ORGANISED AND UNORGANISED WORKERS WILL PARTICIPATE IN THE STRIKE
CENTRAL GOVT. EMPLOYEES ALSO JOIN THE STRIKE AS PER THE CALL GIVEN BY CONFEDERATION OF CENTRAL GOVT. EMPLOYEES AND WORKERS
FIVE LAKHS POSTAL AND RMS EMPLOYEES INCLUDING GRAMIN DAK SEVAKS WILL PARTICIPATE IN THE STRIKE UNDER THE BANNER OF POSTAL JOINT COUNCIL OF ACTION (NFPE, FNPO, AIPEDEU, NUGDS)
THIS HISTORIC STRIKE IS A GLORIOUS FIGHT AGAINST THE IMPERIALIST GLOBALISATION POLICIES OF THE GOVT. OF INDIA
THIS HISTORIC STRIKE IS A FIGHT TO PROTECT THE INTEREST TO THE PEOPLE AND WORKING CLASS OF OUR COUNTRY.
POSTAL EMPLOYEES ARE JOINING THIS STRIKE TO PROTECT THE INDIAPOST AND FIVE LAKHS EMPLOYEES
THIS STRIKE IS TO PROTECT OUR HARD-EARNED RIGHTS INCLUDING STATUTORY PENSION
THIS IS THE GREATEST PATRIOTIC STRUGGLE OF INDIAN WORKING CLASS
BE PROUD TO JOIN THIS STRIKE * BE PROUD TO JOIN THE MAINSTREAM OF THE INDIAN WORKING CLASS
ENSURE 100% PARTICIPATION OF ALL POSTAL AND RMS EMPLOYEES INCLUDING GRAMIN DAK SEVAKS.
LET US SAY IN ONE VOICE
“WORKING CLASS UNITY ZINDABAD”
“DOWN WITH IMPERIALIST GLOBALISATION POLICIES”
Posted by AIPEU GUJARAT at 8:45 AM No comments:

Circle JCA again met on 27.2.12 in which office bearers of divisional/branch unions situated at Ahmedabad were also present. It was decided to make all efforts for successful strike on 28th. At about 5pm all office bearers and members of NFPE, FNPO as well as GDS Unions will be gathered at C.O. for demonstration.

Reports are coming in from several divisions. In all divisions office bearers will actively participate in strike. From few divisions, reports are more encouraging where all staff members are eager to go on strike.

All D/S will carry out their responsibilities to honour call of our Central JCA.
Posted by AIPEU GUJARAT at 11:32 PM No comments:

There are long pending and unattended problems at Nadiad division. C/S had attended previous monthly meeting with the SSP. Once again CS accompnied by Circle Finance Secretary Shri.M.G.Dulera, will attend formal monthly meeting on 27th. Let us hope for a fruitful meeting.
Posted by AIPEU GUJARAT at 11:41 PM No comments:

Joint Executive Committee meeting of P.3/P.4/GDS of Rajkot division met on 26th, sunday at Rafaleshwar Temple, Near Wankaner. It was decided by the Joint Committee that maximum number of employees should join Strike on 28th and in no case any Office bearer of the division/Circle should disregard Strike call.

It was decided that Circle Conference of P.4 will be held by Rajkot division in the month of June, 2012.

C/S attended the meeting and informed members about latest development at Circle level. On request by the D/S P.3 the CS also delivered a small speech regarding great history of trade union movement and glory of our federation.

Posted by AIPEU GUJARAT at 11:38 PM No comments:

Meeting of Circle JCA was held on 25.2.12 at GPO Ahmedabad for discussion on Strike matters. It was decided to make the strike successful as far as possible. It was also insisted that no office bearer of Circle or Divisional level should disregard Strike call. 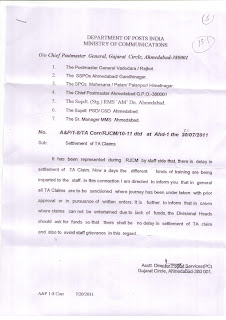 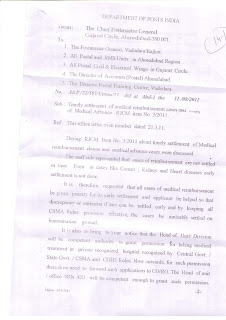 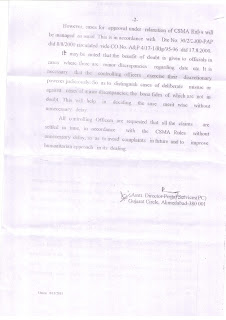 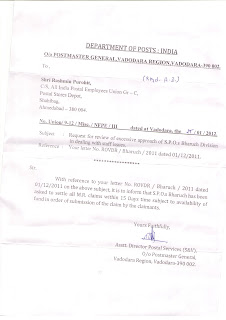 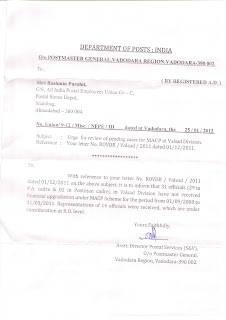 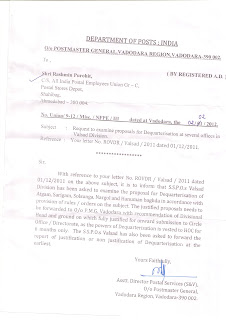