F.No.11012/6/2016-Estt.A-IIIGovernment of IndiaMinistry of Personnel, Public Grievances and PensionsDepartment of Personnel & TrainingEstablishment A-III Desk
North Block, New DelhiDated: 19th January, 2017
OFFICE MEMORANDUM
Subject: Instructions on sealed cover procedure – where Government servant has been acquitted but appeal is contemplated/pending – Clarification regarding.
The undersigned is directed to refer to this Department’s O.M. No. 22011/4/91-Estt.A dated 14.09.1992 issued in the light of the Judgement dated 27.08.1991 of the Hon’ble Supreme Court in the case of Union of India v/ s K.V. Jankiraman etc. (AIR 1991 SC 2010). References have been received seeking clarification with regard to the course of action in cases where the Government servant is acquitted by trial court but an appeal against the judgment is either contemplated or has been filed. This issue has been examined in the light of various court judgements including Bank of India and another vs. Degala Suryanarayana, Appeal (Civil) 3053-54 of 1997, (1999) 5 SCC 762 in consultation with Department of Legal Affairs and it is clarified as following:
i. Where the recommendation of DPC has been kept in sealed cover solely on account of pendency of the criminal case, the sealed cover may be opened in case of acquittal of the Government servant provided it has not been stayed by a superior court.
ii. In the order of promotion a mention may however be made that the promotion is provisional subject to the outcome of appeal that may be filed against, the acquittal of the Government servant. The promotion thus will be without prejudice to the action that may be taken if the judgement of the trial court acquitting the Government servant is set-aside.
iii. In case on appeal the Government servant stands convicted, following action will be taken:
a. The provisional promotion shall be deemed non est, and the Government servant shall stand reverted;
b. In case of the Government servant being sentenced to imprisonment exceeding 48 hours, he will be deemed to be under suspension in terms of rule 10(2)(b) from the date of conviction;
c. Action under rule 19 (i) of the CCS(CCA) Rules, 1965, read with OM No. 11012/11/85-Estt (A) dated the 11th November, 1985 and 4th April, 1986 shall be taken.
2. All Ministries/ Departments are requested to bring the aforesaid instructions to the notice of all concerned and take action accordingly.
3. Hindi version will follow.
sd/-(Mukesh Chaturvedi)Director (E)
Authority: http://dopt.gov.in/
Posted by AIPEU GUJARAT at 12:17 PM No comments:

Namaskar. It has been bitterly complained by many of staff members that no honorarium or Compensatory off has been granted to postal staff engaged on Sunday for previous exam for recruitment in Postmen cadre. There has been complaints for non availability of even drinking water. This time staff has to rush to centres within one hour after receiving SMS in morning. Staff coming from out stations cannot reach by same morning, so their concerned authorities should be directed to relieve them on previous day to ensure timely presence. As our staff will be engaged from early morning to evening, arrangement of clean drinking water, Tea and light refreshment should be made.

Staff side demands to make it distinctly clear about what they will be remunerated in shape of honorarium/compensatory off for previous and coming exams on Sundays.

This is very important.

Awaiting your reply before date of examination.

Sent from RediffmailNG on Android

More
Posted by AIPEU GUJARAT at 11:39 AM No comments:

MAJOR RECOMMENDATIONS OF THE GDS COMMITTEE

MAJOR RECOMMENDATIONS OF THE GDS COMMITTEE

The Committee’s major recommendations are summarized below.

1.      The old system of payment of Time Related Continuity Allowance (TRCA) is dispensed with and replaced with a new wage payment system. Under the new wage payment system, 11 TRCA slabs are subsumed into 3 Wage Scales with two Levels each for BPMs and for other than BPMs One wage scale would be common for both the categories of GDSs.

2.      The minimum working hours of GDS Post offices and GDSs is increased to 4 hours from 3 hours.
3.      The new working hours for GDS Post Offices will be 4 hours and 5 hours only.
4.      The Level 1 GDS Post Offices/GDSs will have 4 hours as working hours and Level- 2 will have 5 hours as working hours.
5.      The Point System for assessment of workload of BPMs has been abolished.
6.      The new wage payment system is linked to revenue generation of GDS Post Offices. Under the new system, there will be no increase in wages of BPMs from Level – 1 to Level – 2 on the basis of workload but the same will be increased based on achievement of prescribed revenue norms which is fixed at 100% for normal areas and 50% for special areas which presently have 15% anticipated income norms.
7.      The GDS Post Offices not achieving the prescribed revenue norm within the given working hours will have to open GDS Post Offices for minimum of additional 30 minutes beyond the prescribed working hours.
8.      The GDSs BPMs will be paid Revenue Linked Allowance @10% beyond Level 2 wage scale if they will be successful in achieving revenue beyond prescribed norms.
9.      The GDS Post Offices has been categorized into A, B, C and D categories based on the revenue generation norms. The GDS Post Office in A category will achieve 100% revenue. The Committee has recommended a set of actions for each category of GDS Post Offices.
10.  The six approved categories of GDs are subsumed into two categories only. One category will be Branch Post Master and all other 5 categories of GDSs are subsumed into one Multi Tasking Category.
11.  The job profile of Multi Tasking GDS is expanded to include work such as Business Development and Marketing etc. Their jobs will no more be confined to their old designations. The Assistant BPM will assist BPMs for increasing revenue generation.
12.  The GDSs working in the GDS Post Offices will be known as Assistant Branch Post Master (ABPMs) and those working in the Departmental Post Offices will be known as Dak Sevak (DS).
13.  The minimum wage has been increased to Rs.10000/- per month and maximum to Rs.35,480/- per month.
14.  The rate of annual increase is recommended as 3%.
15.  A Composite Allowance comprising of support for hiring accommodation for GDS Post Offices as well as mandatory residence, office maintenance, mobile and electricity usage charges etc. has been introduced for the first time.
16.  Children Education Allowance @ Rs.6000/- per child per annum has been introduced for GDSs.
17.  Risk & Hardship Allowance@ Rs.500/- per month for GDSs working in the special areas has also been introduced.
18.  A Financial upgradation has been introduced at 12 years, 24 years and 36 years of services in form of two advance additional annual increases.
19.  The Celling of ex-gratia gratuity has been increased from Rs.60,000 to Rs.5,00,000/-.
20.  The GDS Contribution for Service Discharge Benefit Scheme (SDBS) should be enhanced maximum up to 10% and minimum up to 3% of the basic wage per month, whereas the Department should contribute a fixed contribution of 3% of the basic wage of the GDSs.
21.  The coverage of GDS Group Insurance Scheme has been enhanced from Rs.50,000/- to Rs.5,00,000/-.
22.  The contribution of Department in Circle Welfare Fund (CWF) has been increased from Rs.100/- per annum to Rs.300/- per annum.
23.  The scope of CWF is extended to cover immediate family members such as spouse; daughters, sons and dependent daughters in law in the scheme.
24.  The Committee also recommended 10% hike in the prescribed limits of financial grants and assistance in the Circle Welfare Fund.
25.  The Committee has recommended addition of Rs.10,000/- for purchase of Tablet/Mobile from the Circle Welfare Fund in the head “Financial Assistance from Fund by way of loans with lower rate of interest (5%)”.
26.  Provision of 26 weeks of Maternity Leave for women GDSs has been recommended.
27.  The wages for the entire period of Maternity Leave is recommended to be paid from salary head from where wages of GDSs are paid.
28.  The Committee has also recommended one week of Paternity Leave.
29.  The Committee has recommended 5 days of emergency leave per annum.
30.  Leave accumulation and encashment facility up to 180 days has been introduced.
31.  Online system of engagement has been recommended.
32.  The maximum age limit of 50 years for Direct Recruitment of GDSs has been abolished.
33.  Minimum one year of GDS service will now be required for GDSs for Direct Recruitment into Department cadres such as MTS/Postman/Mail Guard.
34.  Alternate livelihood condition for engagement of GDSs has been relaxed.
35.  Voluntary Discharge Scheme has been recommended.
36.  The Discharge age has been retained at 65 years.
37.  The Limited Transfer Facility has been relaxed from 1 time to 3 times for male GDSs. There will be no restriction on number of chances for transfer of women GDSs. The power for transfer has been delegated to the concerned Divisional head.
38.  The ex-gratia payment during put off period should be revised to 35% from 25% of the wage and DA drawn immediately before put off.
39.  The Committee has recommended preferring transfer before put off duty.
40.  The Compassionate Engagement of GDSs has been relaxed to give benefits to eligible dependents in all cases of death of GDS while in service.
Posted by AIPEU GUJARAT at 5:29 PM No comments: 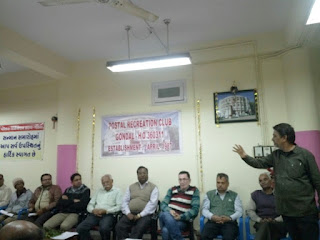 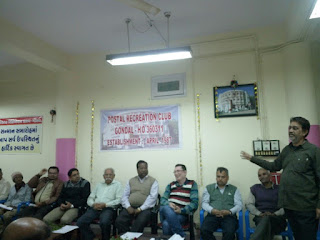 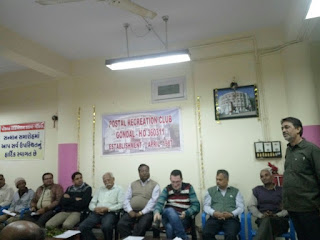 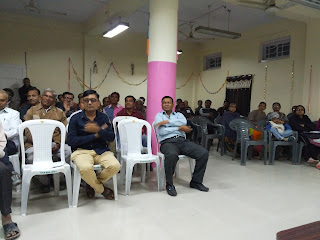 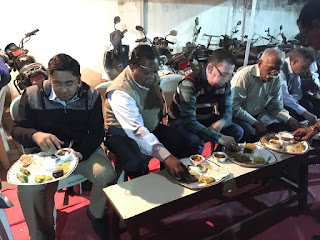 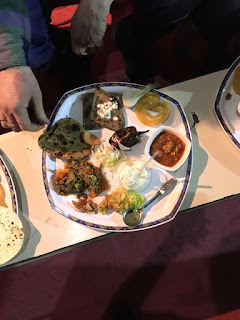 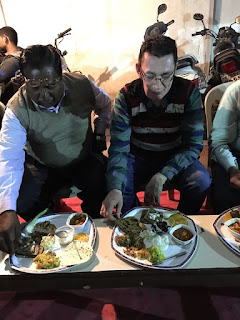 Posted by AIPEU GUJARAT at 10:02 PM No comments:

NJCA had led a relentless campaign to seek upgradation of minimum salary to Rs 26,000, instead of Rs 18,000 proposed by 7th Central Pay Commission.
National Joint Council of Action (NJCA) convenor Shiv Gopal Mishra once again lashed out at Centre for not paying heed to the demands of aggrieved central government employees. Mishra, who also heads the All India Railwaymen’s Federation (AIRF), claimed that he is personally pained since the government has ignored the genuine demands raised on behalf of employee unions. Mishra listed two of the most genuine demands which he wanted Centre to fulfill: Upscaling of minimum salary to Rs 26,000 and enabling Old Pension System for employees hired on and after 1st January, 2014.
“In the recommendations of the 7th CPC both the demands were ignored,” Mishra said in his statement issued for AIRF. He further added, “held meetings with the Cabinet Secretary, Secretary(DoP&T), Secretary (Exp.) etc. of the Government of India, to extract maximum benefits for all of you, but up till now nothing fruitful has emerged,” he added.
Centre had constituted a High Level Committee headed by Finance Secretary Ashok Lavasa to look into the anomalies raised following the implementation of 7th Pay Commission. The allowances of government employees, along with arrears would only be cleared after the committee submits is report. The allowances are likely to be rolled out following the Union Budget.
The report of 7th Pay Commission was notified by Union Government in July. Although the salaries have been hiked using 2.57 fitment factor. However, the hike in allowances were put on hold as employee unions had raised objections. The 7th Pay Commission report submitted by Justice (retd) AK Mathur subsumed 37 and abolished 51 out of the incumbent 196 allowances.
Apart from the National Council (Staff Side), Confederation of Central Government Employees & Workers have launched a campaign against Centre, seeking fulfillment of 21-point-charter of demands. They have called for a nationwide strike on February 15.
Source : http://www.india.com/
Posted by AIPEU GUJARAT at 11:47 AM No comments:

OUR EFFORTS FOR DECLARATION OF 14 JANUARY " MAKAR SANKRANTI" AS CLOSED HOLIDAY. WE SUGGESTED IT'S REPLACEMENT WITH OTHER CLOSED HOLIDAY 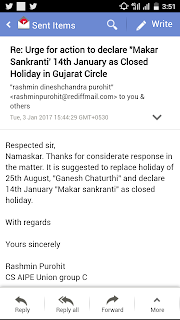