A historical, significant and successful joint meeting of all Divisional Secretaries of both federation from Postal and RMS/MMS wings was held at Nutan School, Subhanpura, Vadodara on 29th July, 2012. Com.K.D.Tailor (NFPE-Navsari Dn. & Shri. Lalvani (Senior leader FNPO-Vadodara) jointly presided over the meeting. Circle Secretaries from all unions were also present. Com. Shubhas Patel D/S Vadodara West and his co workers had arranged this meeting very nicely though there was a very little time for preparation and we were at Delhi in March to Parliament program. Lunch was also provided by this team and first of all I convey special thanks to them for holding this memorable meeting.

All divisional Secretaries from both unions from almost all divisions of Vadodara region got opportunity to express difficulties, pressure and exploitation faced in their division. Circle Secretaries also studied the problems and imparted guidance on several issues. This meeting showed us that postal employees are facing many minor problems which could be resolved by giving a little attention, some guidance and writing letters to appropriate authorities.

Particularly on the issue of heavy pressure techniques and threatening on each and every matter and on several other issues pertaining to harshness by regional administration, discussions at length were made and it was unanimously decided to launch agitation program in phase manner starting from holding 'Dharna" in front of R.O.Vadodara and a March to R.O. Vadodara on a date which will be announced next week. It is premature to furnish details of discussion here at this juncture.

The meeting was historical and significant because divisional leaders from both federations were sitting together as a Group and discussing jointly on issues of their divisions by giving supplementary information and feedback to each other on several issues. Some Divisional Secretaries of FNPO invited Circle Secretary AIPEU Gr.C to visit their division to examine complicated and long pending issues. Circle Secretaries from both Federation instructed all Divisional leaders to concentrate on common problems of their divisions and resist them jointly. It was agreed in one voice that we should not waste our energy and potential in fighting against each other on trivial matters. We must keep our performance up in resolving problems of postal employees. Our ideologies can be different and it has to be as such but when there is attack on employees, we must be united like an iron wall.

This meeting will give a very effective and historical change in trade union movements in Gujarat Circle.

Any suggestion, guidance or advise on this report is always invited.

Please post your comments.
Posted by AIPEU GUJARAT at 10:02 AM No comments: 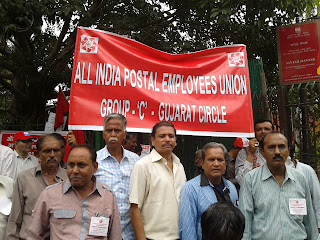 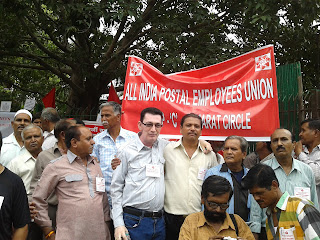 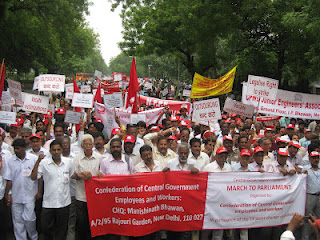 As per call of the Confederation of Central Government Employees and Workers, CG Employees from all over country joined March to Parliament on 26th July 2012 on various demands including demand of formation of 7th Pay Commission. Details and Brief of Demands have been posted elsewhere in this blog as well as Websites of CHQ and NFPE.

This was a historical episode in the trade union movement in the country. Approx 20,000 employees joined the March and a memorable address by leaders were delivered in the parliament street where 20,000 employees were shouting slogans in one voice displaying unity and firm decision to move onward for settlement of demands.