Staff side makes it clear that we have no interest in any individual official to favour him or her but we insist upon a uniform policy and equality in giving justice. It is obvious that officials could be relieved as per seniority of their approval but in Porbandar division some extra ordinary criteria has been adopted.


As informed to us, Shri. D.N.Solanki, Vishal Singala and R.C.Solanki are three officials in PA cadre of Porbandar division  whose application for transfer under rule 38 has already been approved since more than two years and more and they are always replied that their relief will be made as per seniority of approvel, in phase manner.


To the surprise of all, it is learnt that order has been issued by SP Porbandar for relief of one Shri.B.L.Gurva PA Porbandar whose transfer under rule 38 has been approved only before three months or less.


This has created resentment amongst staff concerned and they urges our union to take up the case on priority basis to ensure justice and equality by relieving officials only according to seniority of approvel.


Concerned officials also informally informed that on verbal quarries they were informed verbally that there is pressure of higher authority. I do not want to extend any blames and claims but it is requested to immediately probe in to the matter and ask SP Porbandar to relieve officials only according to seniority or according to one and unique criteria.


Copy to:
sp porbandar
-he is requested to stop injustice and relieve senior officials first and cancel any order if issued beyond rules or practice. 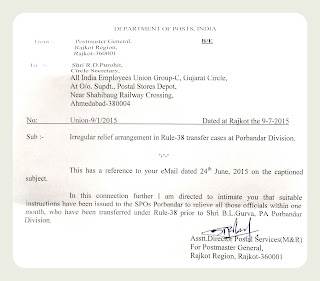