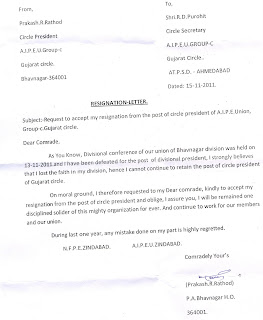 We certainly salute healthy approach and spirit of our President on the issue but undoubtedly he is our devoted leader and elected by the General Body of Junagadh Circle Conference on 30.08.10 and Circle Secretary expresses his clear opinion that Com. Prakash Rathod will continue to render his unparalleled service as Circle President to the organisation for full term.

We are also hopeful that new team of Bhavnagar division will also take benefit of able experience of Com.Prakash Rathod. Elections is a healthy process of democracy. We all are under one and mighty banner of NFPE.

Resignation of Com. Rathod is not required to be accepted. He will continue as Circle President. However it will be presented before next Circle Working Committee Meeting which will be held  in the month of December itself immediately after return of C/S from Allahabad Study camp.

Circle Secretary believes that this blog should be like an open book for Circle union activities. We will never hide anything. Members must know each and everything happening around them. So the resignation letter of Circle President has been displayed here for knowledge of all members.
Posted by AIPEU GUJARAT at 9:58 PM 1 comment:

Farewell to Com.K B Barot on relinquishing charge as Secretary (Staff side) RJCM 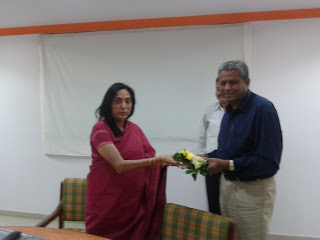 Com.K.B.Barot has been relinquished from responsibility as Secretary RCM (Staff side) today on 30.11.11. He has retired from service on 31.08.10. New Secretary Com. S.C.John who is also a retired and experienced senior comrade has taken over charge today on 30.11.11.

At the close of 84th RJCM meeting today, a warm farewell was given to Com. Barot and his ingenious contribution was acknowledged by the staff side as well as administration side.

A flower buckeye was presented to him by Ms. Humera Ahmed Hon. CPMG Gujarat Circle at the time of farewell.

We wish him healthy, wealthy and satisfactory retired life and also hope that he will continue to extend his positive approach and helpful guidance to new team.
Posted by AIPEU GUJARAT at 9:24 PM No comments:

-detailed report on representations made during meeting, approach of administration side on our submissions, minutes on items of Agenda etc will be posted later on.

A Meeting of staff side was held at C.O.Ahmedabad. The main purpose of the meeting was to elect and nominate new Secretary, Staff Side vice Com.K.B.Barot who has already retired from service on 31.08.2010. Com. Rashmin Purohit C/S have been nominated by the NFPE as Member RCM in place of Com.Barot. After  a discussion, name of Com.S.C.John (retired O.A. from Circle Office) C/S AIPAE Union was unanimously nominated as Secretary Staff side RCM. Services rendered by Com. K.B.Barot, outgoing Secretary were appreciated in one voice by all RCM Members.

Agenda for items to be taken up for 85th RCM Meeting to be held in February 2012 was also prepared. From  AIPEU Gr.C several items have been taken up for the next meeting. The same will be posted later on. Suggestions from any Dnl. Secretaries are always invited.

Hon.Humera Ahmed CPMG was the Chairperson in the meeting which was attended by Shri. B.B.Dave Hon.PMG (B.D.), Ms. Anjali Anand Hon. PMG Rajkot, Shri. Riju Ganguli Hon. DPS (HQ) and Shri. Kamal Kapoor DA (P). Shri. P.C.Bhatt AD (PMI) Secretary Administration side administered the meeting. The meeting was held in a very positive and cordial atmosphere. All items were discussed at length by staff side. Details are lengthy and will be posted later on.

Bimonthly meeting of Vadodara region will be held on 1.12.11. Several items will be taken up and discussed in the meeting. Shri.M.G.Shaikh D/S Bharuch and Com. Suman Patel D/S Valsad have also been asked to attend the meeting as there are so many problems prevailing in these divisions requiring immediate action. Report on this meeting will also be posted later on.

Valsad division:
Circle Secretary accompnied by Com.S.K.Vaishnav Asst. C/S and Com. M.G.Dulera Finance Secretary visited Valsad division. After completing Bimonthly meeting of Rajkot region on 25th, we proceeded to Valsad. The main issue on surface of discussion in this division is regarding pending MACP cases. C/S have collected details, heard members and will make appropriate representation before Hon.PMG Vadodara.

C/S with Asst.C/S and Finance Secretary attended Divisional Conference of Bharuch division on 27.11.11. In this division also issue of huge number of Charge sheets, non sanction of any MR Claims and several other are burning issues. C/S assured members for taking up problems at appropriate level. It was very nice to see that so many young members were present till late hours for hearing C/S as it was late in traffic jam. We congratulate all newly elected office bearers and wish that they will represent problems of their division very effectively and resolve local problems amicably by effective communication with divisional superintendent.

A study camp has been organised by NFPE at Allahabad during 4-6 December, 2011. C/S will also attend the camp. A detailed report will be posted about the study camp later on.

Posted by AIPEU GUJARAT at 5:38 PM No comments:

In accordance with the decisions taken by the Government on the basis of the recommendations of the Committee for Comprehensive Review of National Small Savings Fund (NSSF), headed by Smt Shyamala Gopinath, the then Deputy Governor, Reserve Bank of India, Notifications on changes made in various small saving schemes except 10-Year National Savings Certificate, have already been issued on 25th November 2011.

The major highlights of this scheme are as follows:

The scheme will come into effect from 1st December 2011. Details of the notification are attached herewith and can also be seen on the website of the Ministry of Finance i.e. http://www.finmin.nic.in.
Source : PIB Release, November 29, 2011

Posted by AIPEU GUJARAT at 5:35 PM No comments:

Posted by AIPEU GUJARAT at 5:34 PM No comments:

SB Order No. 24 - Revision of maximum limit of subscription in a financial year, rate of interest on balance in the PPF Accounts and rate of interest charged on loan taken from PPF account w.e.f. 1.12.2011

SB Order No. 25 - Revision of maturity period, rate of interest and discontinuation of 5% bonus on maturity of Monthly Income Account Scheme w.e.f. 1.12.2011

SB Order No. 29 - Revision of rate of commission payable to SAS and MPKBY Agents and discontinuance of Commission to PPF Agents w.e.f. 1.12.2011
Posted by AIPEU GUJARAT at 5:33 PM No comments:

The begaining and end of various Post office Savings Certificates


Posted by AIPEU GUJARAT at 5:32 PM No comments:

Revision of Pension under PF Scheme


Posted by AIPEU GUJARAT at 5:31 PM No comments: