Our real aim is to establish a set up in Surat division, heart of South Gujarat, to meet with needs of PA cadre for redressing their multifold problems and exploitation. Being main Union having majority of staff as our members in Gujarat circle, we are always positive, coordinating and supporting administration without making uproar against routine difficulties in this transition period wherein the department moves forward with redical changes, digitalisation and up gradation of customers' service. But we also take care to see that our employees are not deliberately harrased, exploited and suppressed by creating atmosphere of fear and threats.

We know that there are so many problems being faced by postal employees of Surat division which can be easily solved by taking up in formal Union meetings and writing letters to administration. Hon. PMG Vadodara is also a very positive, neutral and benign officer who would definitely give a patient hearing to problems of staff of Surat Dn.

Let us restart. Any staff of any cadre can communicate with us. Ultimately under mighty umbrella of National Federation of Postal Employees AIPE Union being a major Union takes care for all employees including GDS, Gr.D, MTS, Postmen, PAs.

We hope that postal employees of Surat division will join hands with us, boost enthusiasm of a young leader Shri. Mayank Vakharia. 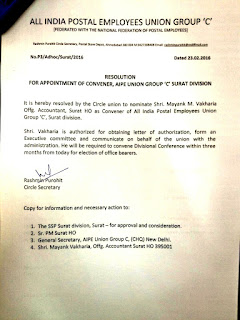 Posted by AIPEU GUJARAT at 6:28 PM